Ashleigh Galvin was born in Toowoomba, Australia in 1990 and grew up in Wyreema, located in Queensland, Australia. She attempted to write her first novel in primary school and hasn’t stopped since. She enjoyed reading Fantasy series as a young girl, which fueled her to start writing as a hobby. Her first published novel, Birth By Fire’s Embrace, was released in May 2013.

Many people ask Ashleigh where she gets her ideas from and her answer is simple: daydreaming. She likes to call them epic daydreams because some can last for a week or longer. Interestingly enough, she gets most of her story ideas this way. Now she has combined her great imagination and her love of fantasy to create exciting and fresh novels featuring strong characters and lots of action to keep even the most imaginative mind fully enticed.
How many books have you written?

I’ve written three books although only one has been released at this stage. My other two novels, sequels to my first Birth By Fire’s Embrace, are currently in the publication process so hopefully they will be released some. Once I’ve finished editing the third novel, I’m going to start on either the fourth installments of the Amethyst Series or maybe a side project. Haven’t decided yet.

Give a short synopsis of your most recently published book. 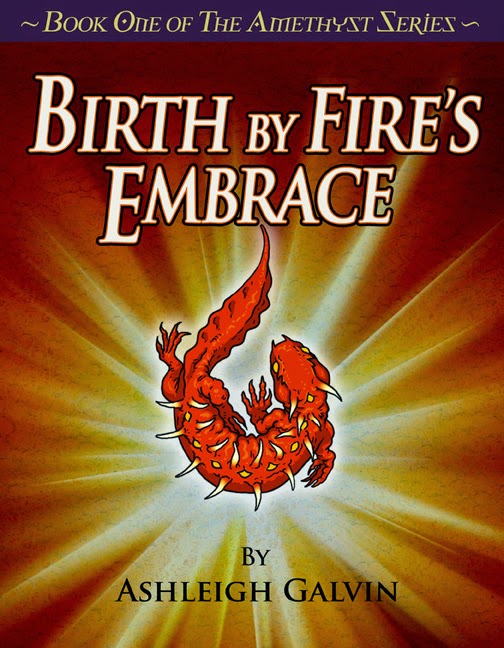 A taut fantasy for all ages, Birth by Fire’s Embrace explores how drastically things can change when the world that lies just beyond our senses begins to surface. When all that is familiar vanishes from Shar’s life, she begins to look inside and find the strength and courage to carry on in a harsh world, and look towards another world that lies ahead.
At the beginning of the summer she was doing so well; done with school, a promising promotion in the works, the best boyfriend a girl could ask for, and the chance of a lifetime at the Academy. Then he came and it was all ashes. He had cost her everything, the job, the boy, the acting school, and even her family. He had cost her the world.
What Shar didn’t know was that the stranger was actually there to protect her from another dark intruder in her world. Caught in a deadly game between two lethal adversaries, she comes to know that there are forces around her that she has only dreamt of. Forces that will bring her to the edge of death and back again, that will show her a new realm to fill the void left by the one she has lost.

I think the best lesson I’ve learnt is just to keep writing. Every word written will help your craft grow and evolve. It’s very important to find your voice when you write as well. It’s your voice that will separate you from all the other authors writing in your genre. And the best way to find your voice? You guessed it! By writing. Write short stories. Write long stories. Keep a journal and write down your whole day every night. Try to make it sound as epic as possible without stretching the truth too much.

Story ideas always start in my head as either a day dream or as an epic flash of I Must Write This! I keep the idea in my head for a few days, mulling over the details and trying to refine the story as much as possible. Once it’s ripe, it’s time for it to leave my head. Normally my story ideas get added to a folder on my USB. However if I’m away from my computer, I find the closest piece of paper and write it down so I can transpose it later. Once the idea is out of head and on the USB, my brain can start to think up new ideas. I have a notepad I use a lot but that’s mostly for help with planning and writing the novel, not storing ideas.

I’m a very active marketer. I try as hard as I can to get my book out there but it’s very difficult when you’re not drowning in money. I have a webpage which I post up regularly and also a monthly newsletter to help people keep up to date with what’s happening. I use Facebook, Twitter and Google+ as well. I’m on GoodReads and often try to run ads there because their price is actually really good.  I also have a video on You Tube and will hopefully be able to add more once I get my new camera.

My future writing goal is to finish the Amethyst series but that’s going to take quite a while. I’m most probably going to start writing other books in between each of the Amethyst books to give myself a break and to shake up my writing style with different genres and characters. I’ve got about fifteen other book ideas on my computer at the moment so there’s plenty of inspiration to choose from.

Birth By Fire’s Embrace is currently available in both Paperback and Ebook formats. They are available in most online stores including Barnes & Noble and the IBook store but I have included the Amazon.com links below for ease of use.

I wish you continued success, Ashleigh. Thanks for dropping by.

Posted by Susan Whitfield at 12:39 PM No comments: