Lynette Hall Hampton is my special guest today. Welcome, Lynette. Give us a little history about yourself.
I was born into a family of readers and writers. My Dad read western novels by the car load. When he retired from public work he read at least one a day for the rest of his life. My Mother read everything from Shakespeare to Grace Livingston Hill and wrote short stories and poems. She also wrote a column for her local paper. In the third grade I discovered a book called Cowgirl Kate and decided then and there that I’d someday write a book someday. It took many years of writing magazine articles and an occasional short story for me to reach that goal. In 2003 my first mystery novel, Jilted by Death was published. I haven’t stopped writing novels since.

I've read all of you books and enjoyed them very much. Briefly tell us about Stetson Mold.
My latest book, Stetson Mold, came out in January of this year from Wings ePress in e-book and trade paperback. It is a stand alone romantic suspense. It’s setting is an injection molding company which is located in Huntersville, NC – a small town near Charlotte. Stetson Varner dies and leaves his company and all his assets to his niece, Shelly Wakefield. When she takes control of the company, she learns that Stetson Varner didn’t die in an automobile accident as was reported, but he was murdered. In her struggle to learn who killed her uncle, she faces threats, sabotage, a potential strike and the possibility that the handsome molding manager is behind it all before she leans who she can and can not trust in the company.

How do you develop characters? Setting? Plot? And do you have specific techniques you use to stay on track?
My characters and plots have no rhyme or reason about them. It may sound strange, but my characters seem to pop into my head, sometimes uninvited. At first they’re fuzzy and nameless and without much form. To find out who these drop-in guest are I have a series of questions for them. Name? Age? Married? Single? And so on. After I get a fix on them, I start asking such things as: Where are you? What are you up to? Where do you work? Why are you bugging me? When I get the answers here I usually start writing. I don’t worry about a full blown plot, though I often have a vague idea of how things are going to end up and it usually does end this way. It’s the twist and turns in the middle that often surprise me. Though I know a lot of writers plot their entire novel before writing, I can’t seem to do it. Every time I’ve tried, the books have ended up not written or tossed in the trash. I’m not saying that I don’t plot at all, because I do. It’s simply a chapter or so at a time and as I do this I asked myself, “How is this going to lead to the ending I have decided on?” It’s kind of like a thirty-day trip I took across several years ago. I knew I was going to go a northern route through Ohio, Michigan, Montana and Oregon, go down the California coast and come back to NC by way of Arizona, New Mexico and Texas. I didn’t plan some of the most fun things – the off shoots of visiting the Grand Canyon, The London Bridge in Colorado or touring the plantation in Louisiana among other things. And though I started out and ended up where I planned, I had a more exciting time doing ii than if I’d know about these things in advance.

Where do you write? What do you have around you?
I’d like to impress everyone and say that I have a beautifully appointed office, but alas that would be fiction. Because my son-in-law had to take a job out of town and he’s away five days a week, I have recently downsized and moved into a small apartment connected to my daughter’s home. I have a large living room and one wall contains bookshelves, a desk with my computer and a television in the corner. My file cabinet is in my walk-in closet and my cat thinks the back of the desk is his private sleeping quarters. (He’s nineteen years old, so who am I to argue with him?) At least it’s private and my two grandchildren are most of the time thoughtful enough to knock before coming into my area. My seven-year old granddaughter sometimes forgets and will come bounding in, grab her mouth saying, “Oh, I forgot,” go running back out and knock. It always makes me smile.

What are your current projects?
I have to laugh when I think of this question. I’m one of those strange writers who works on more than one book at a time. I’m about half through the third in the Rev. Willa Hinshaw series, though it’s giving me more trouble than any other of the series. I have completed three books in the Coverton Mills Romance series and am working on the fourth. A third of the third book in the Ferrington Men series is finished and I’ve recently written a stand alone historical romance which is looking for a home. I’m now writing the second in this genre. I like stretching my mind and attempting different forms of novel writing, but I haven’t had the urge to try my hand at erotica yet. Probably won’t do that one.

Some of this books will be out in the future. The first in the Coverton Mills series, Lady Slippers for my Lady will hopefully be coming out from Wild Rose Press in 2011 under my pen name, Agnes Alexander. Your Place or Mine? is scheduled to be out later this year from WriteWord Books. The mass paperback reprints of Jilted by Death will be out this summer from Harlequin’s World Wide Mysteries. They will publish Echoes of Mercy in 2011. I have offered Wings ePress the first in my Calendar Clan series. So, like all writers, I’m waiting to hear form the others I have out.

Where can folks learn more about your books and events?
My website, http://www.lynettehallhampton.com/, is in bad need of updating, but my older books are there. Most of my books are available on Amazon and other on line booksellers. Of course they can be ordered from the publishers: PublisherAlabaster.Biz or WingsPress.com. I keep books on hand myself and my email is LynetteHampton82@Yahoo.com.
Thank you for interviewing me, Susan. I enjoyed it.

It was my pleasure, Lynette. Good luck with all those books going at once. I tip my Stetson to you! 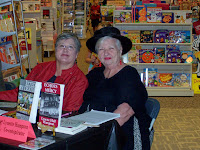 Lynette (in the hat) and Susan at
Carolina Conspiracy event
Posted by Susan Whitfield at 8:00 AM 1 comment: