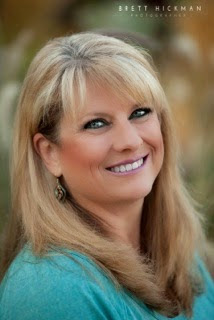 Marti Melville is an American novelist and screenwriter known for her debut novel series, The Deja vu Chronicles.  Marti has expanded her writing to include screenwriting with each of her books adapted for film.

Before Marti found her true calling as a successful author, she had long established her career in the medical field, specializing in Emergency and Trauma nursing. Marti spent several years working between Utah and California in various ER's, as a Mobile Intensive Care Nurse and medical personnel for the 2002 Winter Olympics, all the while raising her five children as a single mother.

She has a background in dance, music and acting as well. She continues to write novels, introducing the idea of fictional probability linked to historical events. Marti currently resides in Southern California.
Welcome, Marti. It's great to have you on the blog.
Thanks for having me, Susan.

I have written three of four in the Déjà vu Chronicles.  I’ve been a co-writer for several others that have been published under a different author’s name.  My writing also includes several screenplays that have been taken to Hollywood for consideration.
How much of yourself is hidden in the characters in the book?

People who know me state that Kathryn’s story is really my own.  That was never my intention writing the novel series.  However, I write what I know and so much of what happens (particularly in the ER) is from my experience.  Kathryn is a combination of my daughters – their feistiness and beauty.
Do you travel to do research or for inspiration? Can you share some special places with us?

I travel extensively to do research for my novels.  This series takes place in the Caribbean, which is a great place to do research.  My favorite island is Grenada, which had many interesting and fun cultural and natural elements I would not have been able to use in the books.  Did you know Grenada has tree frogs that whistle at night?  I’ve used these frogs in Onyx Rising to make it more authentic – as well as other interesting elements exclusive to the Caribbean islands.

I’ve learned that my ideas and imagination has value – to myself and now to others.  Doubting my ability to write would have stifled the opportunity to share it with others.  I never aspired to write novels (or screenplays) but taking the risk has made for a wonderful career.  My advise to anyone who aspires to write is to simply do it.  Wherever the impression hits and whenever you can, — write.  Don’t’ doubt yourself and certainly don’t stop.  Every single day, write something — whether it be a chapter, a page or just a sentence – write!
Can you tell us your future writing goals/projects?

I am currently writing the fourth (and final) book in The Déjà vu Chronicles series.  I am also co-writing a medical thriller, as well as a horror novel.  I find that writing several projects at once keeps my creativity from becoming stagnant and keeps me interested in the stories.  In addition, I co-write screenplays with my writing partner – the first in the series, Midnight Omen, recently won the Life Fest Film Festival 2015 in Hollywood, CA.

Give a short synopsis of your most recently published book, Onyx Rising. 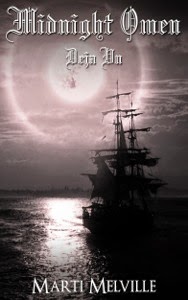 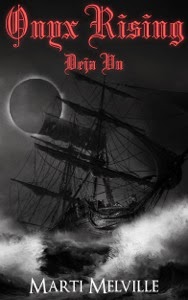 Obscurity conceals the moon and the black omen rises.  Maelstrom and dark deeds follow those who sail Caribbean waters.  Their captain is presumed dead, which leaves the crew of the Revenge to seek other ways to survive and fresh ships to plunder.

Kathryn must also find her way through the darkness and discovers a hidden treasure lay buried in secrets hidden within the dead.  Magic and mysticism weaves through the Caribbean Sea as the Onyx Moon hovers.

Set in 1723, the third novel in The Déjà vu Chronicles, Onyx Rising continues the paranormal adventures of Kathryn, Seth, Archer and Calico Jack Rackham – as well as Captain John Phillips – an actual pirate known for his ruthless history pirating the Spanish Main from 1721-1724. 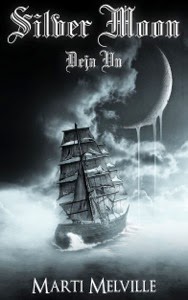 Marti, I wish you continued success with your endeavors!
Posted by Susan Whitfield at 8:00 AM No comments: