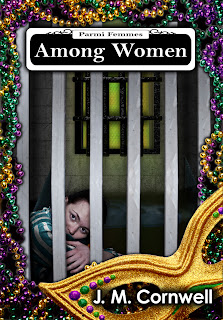 J. M. Cornwell lives in the Rocky Mountains of Colorado where she shares bits and pieces of her past in Chicken Soup and Cup of Comfort anthologies and searches for the perfect place to build a cabin by a lake.

Welcome, J. M. That setting has to be inspirational!

It certainly is, Susan.

There are 14 books: two novels and 12 anthologies. 22 if you count the eight books I ghostwrote before I decided to write my own books, and one bio-bibliography, on Charlton Heston, that never was published because the company was bought out and the series shelved. I worked for a year on that book.

What books or authors have influenced you?

Almost everyone I read influences me in some way, sometimes with what not to do, but most especially Marion Zimmer Bradley, Andre Norton, Michel Montaigne, and Algis Budrys. They took the time to let me know what was good and bad about my writing – often in great detail – and became good friends, except for Montaigne, who is a little before my time.

To keep writing and publishing until I close my eyes for the last sleep.

What is your most rewarding experience during the writing process?

When everything is effortless and I can hear and see everything going on. It’s what Andre Norton called looking at the inside of the donut. Telling a story is like standing in the middle of a donut. Whichever way you turn you see or hear or sense something new and the writer’s job is to get it all down.

Tell us about your latest book. Is it available in print, ebook, and Kindle formats?

Among Women is my latest novel and is available in ebook from Smashwords, Amazon and Barnes &Noble and will be out in print this week.

Among Women is about a woman who is stranded in New Orleans. Everything she owned was stolen and she is homeless, but she keeps going. Just when she’s about to make it back into the mainstream she is arrested and put in jail without a lawyer or having gone before a judge. She doesn’t know how long she will be stuck in jail and she’s scared. A murderer reaches out to her and offers to help. As she gets over her fear, she begins to see all the women are really not that different than she is and she begins to listen to their stories. Pearl becomes a modern Scheherazade telling her own story and the stories of the women in order to survive.

Do you think your writing has improved since your first attempt?

I should hope so. I’m no longer eight years old and I have lived a bit. Even what I wrote a few years ago is different than what I write now because I have changed. The most obvious evidence is in Among Women. I’ve written and rewritten the story dozens of times in the past 30 years, but this time it finally came together.

Every book provides its own challenge. Finding the right voice, the right format to tell the story, researching and getting the details right. I check calendars for books that have a more contemporary setting and I read a lot of science and history to get the little details right. It’s all in the details. That’s what sets a good book apart from a mediocre book, when the details are so real you are transported to whatever world or period in history and you believe in what is being written. Of all the books I have written, and I include the eight books I ghostwrote for others, Among Women was the most challenging because I had to let go of the facts sometimes in order to make the story more interesting and to make it work. I stuck pretty close to the real events, but I did allow myself some license in going off the track. Merging fact and fiction and making it into a good story was my biggest challenge. Once I was able to get lost in the story, it finally came together.

I see situations and the characters are developed from that initial idea. The same for setting which is inextricable from the characters. I’m working on a new novel set in Victorian England that began as a question about why Dr. Jekyll decided to split himself in two to get rid of his darker nature. Robert Louis Stevenson never gave a motive, and that always intrigued me. I asked what would make a man want to get rid of his emotions and the answer I kept coming back to was a woman. Delilah Makepeace was born.

In Among Women, I was dealing with personal experience and telling the story of women I had met, so the process was a little different as the book was born of my own trials and tribulations in New Orleans in 1984. There is quite a bit of fact in the book, but also a healthy dose of fiction.

Baby books. For instance, I wanted a Korean name for one of the characters in Among Women so I went through pages and pages of Korean names and came up with Joo-Eun, which means Silver Pearl. In some ways, she is a mirror for Pearl Caldwell, the protagonist, in that she, like most of the women, has been betrayed by her brother. Pearl is betrayed by her lover and in both cases the charges are false.

What are your protagonist’s strengths? Flaws?

Pearl is from a middle class background. She has had it easy and she thinks she knows how to survive, but it all comes from books. She begins by seeing people in black & white until she opens up and begins to listen. Her curiosity and desire to right the wrongs she sees are flaws as well as strengths and they lead her deeper into the lives of the other women. It is her need to know why things happen and what she creates out of them that are her salvation and her biggest flaw because she gets to a low point where she just wants to go to sleep and never wake up. Pearl is compassionate even though she is afraid of the women and she is also a bit of an elitist when she wakes up in jail because she sees the women as faceless and not worth her time. They scare her almost as much as they begin to intrigue her.

I just keep writing and then go back through when I’m finished and reread everything. I also have a great editor who reminds me when I have gone off the path or lost a character somewhere. It was easier with Among Women because I already knew the story, but I had rewritten and edited so much from the initial draft that I did get a little off track. I know whatever story I’m writing from start to finish because I can see the whole donut, so that makes it easier, but the characters do sometimes surprise me and take me off in different directions. Then I just hold on and follow them.

I’ve always said that if you want to know what an author is like, just read their stories. My curiosity and what interests me at the moment are in everything I write, especially when I blog. I write from experience and passions and the pique of the moment. It goes back to what I said about my writing changing because I’ve changed. Everything I read, experience, see, sense, hear, and do gets filtered into the writing and into the characters, most of whom are extensions of me, a sort of what if I had done this instead of that. They are a way to explore different avenues and try on different lives without actually having to change everything.

I’m learning more about how to do that because I tend to be more interested in writing than promoting. I’d rather have someone else do it, but especially with Among Women, which is self-published, I’ve had to be more proactive, like contacting reviewers and interviewers and asking if they’d be interested. I’ve done podcasts and I bore people silly with posts about the writing and publishing process, about subjects related to the work and I beg people I know, like you, to please interview me. I also comment on blogs and make a nuisance of myself whenever possible, but not to the point of being truly obnoxious, just mostly obnoxious.

Can you tell us about current or future projects?

I have several books outlined, but the one I need to finish first is Whitechapel Hearts; that is the story of Jekyll, Hyde, and Jack the Ripper and the woman who was responsible for it all: Delilah Makepeace. After that one is done, I’m going into the future with a post apocalyptic vampire story unlike the usual vampire fare. My vampires come from two different mind sets. One is as protectors of humanity during a long nuclear winter that has lasted 400 years and the other vampires breed human like cattle for food and to make their lives easier. The latter vampires live in domed cities while the other vampires, called Memories, live underground with humans, guiding and protecting their knowledge for the future when humanity can re-emerge on the earth and being living above ground again.

Where can folks learn more about your books and events, J. M.?

I keep blogs in several places, but the main spot is my author blog on Red Room at http://www.redroom.com/authors/jm-cornwell. That is also where I have links to all my books for sale, podcasts, and of course blog entries.
Posted by Susan Whitfield at 8:00 AM 5 comments: 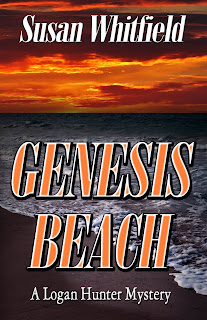 Introducing the new revised edition of Genesis Beach, the first book in the Logan Hunter Mystery series, now under the L&L Dreamspell label. Only available in ebook at the moment, but print coming soon. Thanks Lisa and Linda, my wonderful publishers, for another tremendous effort!

http://www.allromanceebooks.com/product-genesisbeach-549384-152.html
Posted by Susan Whitfield at 6:38 PM No comments: