It's been quite a while since I posted anything about my own work. I've been interviewing and showcasing others. But this morning, I thought I'd post about my own series and the current project, a non-series book. When I wrote my first book, I ran into the same problem so many of us face:  plenty of rejections. After months of trying to write the sequel and getting nowhere with the first novel, Genesis Beach, I self-published. I had a fairly good experience with it until I tried to get the book into chain stores and got the cold shoulder at every turn. To shorten the story, I was thrilled when L&;L Dreamspell, a small Houston-based publisher, signed me. They picked up Genesis Beach, much to my delight, and gave me the opportunity to rewrite and strengthen sections of the book. They also created a cover with major impact. There are currently four novels in the Logan Hunter Mystery series.

Genesis Beach is set along the North Carolina Crystal Coast with a quirky and gutsy young female SBI (state bureau of investigation) agent. The second novel, Just North of Luck, is set in the beautiful Blue Ridge Mountains and showcases Madison County and Asheville. I really upped the ante in this one by having a serial killer and getting into his brain or rather having him in mine. It truly was a scary time for me since I carried this character around in my head for months. I was relieved to finish the book and have him move out of my space. In this book, Logan meets Chase Railey, a Madison County detective who works with her on the multiple murders, all gruesome and not fitting a serial killer mold.

In Hell Swamp, Logan thinks she can take a few days off, her supervisor assigns her to investigate a murder at Black River Plantation, four miles from where she spent her childhood. She heads to Pender County begrudingly and confronts a sheriff and deputies who failed to contain the crime scene, creating a nightmare for Logan. As she begins to question deer hunters in the area, she learns that the victim had many enemies and nobody is stepping forward to help her find the murderer.  When she eventually finds the killer, she and the entire rural community are shocked beyond belief at the circumstances that led to murder.
Chase comes in to help her with this case, but a misunderstanding leads to a strained relationship. When the couple are trapped and nearly fried by an arsonist's forest fire, they vow to work things out if they survive. By the end of the book, Chase proposes. He is sworn into the SBI.

As Logan leaves her bridal shower in the fourth novel, Sin Creek, she is paged to a local university campus where the body of a young student has been discovered. Even though she and Chase make it down the aisle, they are often assigned different cases across the state, and Chase's terminally ill mother dies in Asheville, sending him home to handle the arrangements and leaving Logan to work with an obnoxious agent sent in to help. Logan and Farris McCracken (Crack) don't get along. The tension is deafening and distracting, but the investigation moves along...right into the pornography industry. Logan is incredibly uncomfortable about having to follow Tit (Thomas Irving Trollinger)who appears to be the porn king. She ends up on a ferry dressed as a bar maid and discovers that Crack is also onboard. When she has to make a hasty retreat in a lifeboat, Crack jumps in and drives her 4-inch heel through the raft, causing it to spring a leak. They end up swimming to a small island in the middle of the Cape Fear River, hoping the river alligators don't notice them. Logan is relieved when Chase returns to help, but she has no idea how her life will change before the investigation is over.

All of the Logan Hunter books are set in North Carolina, where I've hung out all my life. There's so much beauty here, so many dialects and personalities. I love this state!

I'm in the planning stages of the fifth Logan Hunter Mystery, tentatively entitled Punch Street. But I have been working on a non-series novel about lifelong friends, Mackie Sue Beanblosson and Daisy Marie Hazelhurst, in their sixties, going through hot flashes, weight gain, marital problems, and trying to hold down jobs. You know, a day in the life sort of thing.  The book is entitled The Goose Parade of Old Dickeywood. It's entirely different from the Logan Hunter series, but I am having fun with it. I hope to have it ready for publication in 1212, but I really need to get busy.

Video trailers for Just North of Luck, Hell Swamp, and Sin Creek are over at Youtube.com  All books are available in print and ebook from the publisher, online stores, or through my site, www.susanwhitfieldonline.com  I hope I've whet your appetite. Leave a comment for a chance to win the book of your choice!
Posted by Susan Whitfield at 10:40 AM 7 comments:

“Pay no attention to that man behind the curtain.” – The Wizard of Oz.  "That’s what I like to say when people ask me that.  I’m a full-time writer, and I like to hide behind my characters."

How many books have you written, K.S.?
I’ve written or at least started writing a lot of books.  Six have gone to publication:  Lust for Danger, The Mighty Oak and Me, The Kiss of Night, Postcards from Mr. Pish Vol.1, Night Undone, and Mr. Pish’s Woodland Adventure.
What books or authors have influenced you?
I read a lot when I was younger.  Bookworm would have been the perfect word to describe me.  So the impact that these books had, to stand out above the rest, I think says a lot – to me anyway.  The Count of Monte Cristo by Alexandre Dumas (pere) taught me how to round out characters; pretty much anything by Oscar Wilde inspires painting with words; Rudyard Kipling magically provided a moral to the story; and Warren Murphy’s Pigs Get Fat was a fantastic lesson in writing better suspense.
Tell us about your latest release, Night Undone.
I feel like I took a big risk with Night Undone.  I stepped way outside my comfort zone with this story.  I’d never written something so character-driven, so personal...while it reveals a lot about Agent Night I feel like it sort of leaves me standing naked in the middle of a busy intersection.  The story follows former Special Agent Kathrin Night as she tries to come to terms with her career-ending injury, civilian life, and her Russian lover after he reveals his deepest, darkest secret – turning their lives upside down. It’s available online and at Amazon.com in print, e-book and Kindle formats.
Were any of your books more challenging to write than the others?
My educational children’s books are hard work because I want to make sure everything is absolutely correct.  A lot of verification has to be done.  My “Agent Night Adventure Series” books have been the most difficult to write – but that’s really my own fault.  I write faction, and I set these books in locations so exotic that they’re difficult to research.
What are some of the problems you faced while plotting a series with ongoing characters, K.S.?
I’ve been thinking about that a lot lately, actually.  I’m daft enough to be writing two series with the same character simultaneously – the Agent Night Adventure Series features Special Agent Kathrin Night during the height of her career as a field agent (2000-2009).  The Cover Me Series follows Agent Night after an injury in the line of duty, as she struggles to deal with ‘civilian life’ while trying to resurrect her career (2010 and after).  At first, I found writing the latter was helping me improve the first series immensely.  It was making me think ‘cause and effect’ and enriching the first series by helping me plant the seeds that would bloom in the Cover Me Series.  Then I got an idea for a possible love interest who I could introduce in the early series – but I’d already limited myself as to how many “relationships” she’d had during a Cover Me session with a shrink.
How do you develop characters?
My characters tend to develop themselves.  But if I have anything to do with it, I pile obstacles in front of them and see how they deal with them, pushing them to grow and learn in the process.
What are your protagonist’s strengths? Flaws?
Special Agent Kathrin Night is complex, yet simple at the same time.  She’s dedicated her life to serving justice and protecting the innocent, at the same time isolating herself socially.  This makes her an extremely effective agent, but a somewhat inept human.  She has difficulties relating to the emotional and psychological needs of others since she’s closed off that part of herself.
Can you tell us about current or future projects? 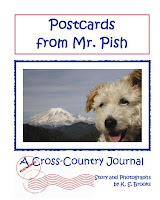 I’m nearing completion of Postcards from Mr. Pish:  A Cross-Country Journal Volume 2.  This installment will take kids (and adults) on a journey through Mr. Pish’s (the traveling terrier) eyes from all the way to , including neat locations in and , ; , , ...and so many more I can’t list them all.  I’m also working on the sequel to Lust for Danger, which I started back in 1991.  Yikes!  Some of the locational research really slowed me down, but now, thanks to the internet, and my fantastic research assistant Kyle Londagin, I’ve gotten what I need to get this action-packed thriller done.  I’m hoping to have the drafts of both these books completed this year.
Where can folks learn more about your books and events, K.S.?
Facebook is such a handy tool.  All my books, and whatever else is going on, is posted on my author page at http://www.facebook.com/KSBrooksAuthor.  My website, http://www.ksbrooks.com, has a lot of biographical information as well as some writing tidbits and links.  A fun place to learn about what’s going on with my children’s books is at http://www.facebook.com/MrPish.  We have lots of trivia and give-aways which promote outdoor learning and literacy – geared towards adults.
Thanks for stopping by, K.S. Continued success!
Posted by Susan Whitfield at 8:00 AM 2 comments: