Robert M. Roberts, author of The Monkey Toy, is my guest today. Welcome to the blog, Robert.
It’s a privilege to be a guest on your blog, Susan. Thank you for inviting me today.

You betcha.
Tell us some things about yourself that readers might be surprised to learn.
It’s a beautiful day in the Hamptons and almost time for tea and crumpets. However, I’m not in the Hamptons, but live in a small town in the Ozark Mountains of the Midwest. We’re also out of crumpets, so I just polished off a salami sandwich and a beer. But, on a more serious note, I’m 63 years old and enjoy life with my wife and cat. I served in the United States Navy and am a Veteran of the Vietnam War. A few years ago, I retired from Wal-Mart Stores, Inc., and decided to write my first novel. I started it in the winter of 2000, and wrote about six chapters, but then became frustrated and laid it down. Ten years later, I picked it back up like it was the next day, and the result is my thriller, The Monkey Toy.
What has been your most rewarding experience in your writing career?
One of my main goals in writing is to keep the reader constantly engrossed in the story. It’s very rewarding when a reader tells me that my book was so interesting and fast-paced that they couldn’t put it down. A couple of weeks ago, one of my readers said, “I read it from cover to cover in one sitting, and only stopped for bathroom breaks.” This proved to me that I had accomplished my goal. This person was able to escape the reality of everyday life for a few hours. That’s what I call rewarding.
Tell us about your latest release, The Monkey Toy.
It’s a fast-paced thriller that takes place in a military setting. The book begins during the Korean War when a Navy jet collides with an unknown aircraft. The story rapidly advances to present day, when U.S. sailor, Randy Farren, finds an object from the crash on an uninhabited Korean island. Randy, and others who possess this object, begin having headaches, hallucinations, and nightmares. The story evolves into a chase around the world for the elusive object which entails murder and government conspiracies, with a touch of humor and light romance along the way.
Is it available in print, ebook, and Kindle formats?
It's available in paperback and Kindle format. In the U.S., you can find it in on amazon.com, barnesandnoble.com, booksamillion.com, and createspace.com. It is also available on Amazon in the U.K., Germany, France, and Japan.
How do you choose your setting?
I almost always choose the settings from places I’ve actually been. I think it adds more realism and detail to the storyline. For instance, in The Monkey Toy, I travelled to most of those foreign countries when I was in the Navy, or when I worked as an international salesman for a printing press manufacturer. For the Roswell, New Mexico UFO crash segment of the book, I actually travelled to Roswell to see and learn everything I could about the incident.
How does your environment/upbringing color your writing?
My mother and older siblings had really vivid imaginations, so I picked up a lot of things from them. I also spent a lot of time in movie theaters as a child. I guess the most influence would be growing up in my parents’ beer tavern, where I observed the daily cast of characters with all their unique personalities.

Can you tell us about current or future projects?
The Monkey Toy has already gotten some good reader reviews on amazon.com.  Currently, I’m finishing the final rewrite of my next thriller, Souls of the Desert. It will be released in the next few months. I’ve completed a few pages on my third novel, also a thriller, entitled The Running Boy that will be published in the middle to latter part of 2012.
Where can folks learn more about your books and events?
You can find out more about me and find links to purchase my work by visiting my author website, http://robertsnovels.com , or my blog, http://robertsnovels.blogspot.com . I’m a resident of Book Town, and you can follow me on Twitter, @RobertMRoberts.

It's a pleasure to spend time with you, Robert. All the best! See you around Booktown.

YA author, Marianna Heusler, is on the blog today. Welcome, Marianna! Tell us something about yourself that readers might be surprised to learn.
I wrote my first book when I was twelve. It was patterned after a Nancy Drew mystery and some of the girls in my class wrote their book reports using it. I was thrilled. But it took me thirty years to actually publish anything.
How many books have you written?
I have published seven books with one book coming out this winter. I have written at least a dozen books which are still in my drawer!
What has been your most rewarding experience during the writing process?
I love it when I see people reading and enjoying my books.
Tell us about your latest release.
The Day The Fortune Teller Died is a YA mystery, the second in a series. The first book The Night the Penningtons Vanished was nominated for an Edgar. When a fortune teller predicts that great harm will come to a new girl in school, Isabella, Vicki and Lauren are determined to learn who is going to harm Eve. When the fortune teller turns up dead, all the girls are in danger.
Is it available in print, ebook, and Kindle formats?
The book is available in print.
Were any of your books more challenging to write than the others?
I find YA more challenging to write than adult books because I write them from one point of view. Everything has to happen to the main character and everything is seen and felt through her perspective. When writing from several points of view, you have more options.
How do you develop characters?
When your characters are teenagers or children, it’s important that they solve the mystery themselves with little or no parental help. Therefore, there has to be a reason why they don’t tell adults the trouble that they’re facing. In my books the adults are either busy with their own problems or the kids have done something wrong, which they’re afraid of confessing. And, of course, left on their own, things often spiral out of control.
How does your environment/upbringing color your writing?
I went to Catholic school until I was twenty-one and for a while, I was a Catholic school teacher. I can’t resist sprinkling some of my background in my writing.

Thanks for visiting, Marianna.

Nice to be here, Susan.
Posted by Susan Whitfield at 8:00 AM No comments:

Richard Barnes is visiting today. Richare, thanks for dropping by. Please tell us about your latest release, Bad Medicine.


Is it available in print, ebook, and Kindle formats?

Bad Medicine, a murder mystery, is my fourth novel, set on a remote (for most readers) island in Northern Ontario, where my family vacations. The island’s proximity to the US border prompted smuggling as a motive for evil doings there. For this book I chose as my protagonist a 43-year-old divorced woman, having never written from a woman’s point of view. The story involves her returning to her family home on the island from her job as a police investigator after being wounded on the job.
She finds her girlhood boyfriend embroiled in a murder, and gets caught up in the investigation. Counterfeit drug smuggling and White supremacy are the principal themes of the plot.
What books or authors have influenced you?


That’s a tough question for me. My education was technology, and I missed out on the liberal arts. While I read my share of books, my tastes were eclectic. I like to write as tightly as I can, so I’d say that guys like Stephen King and Elmore Leonard are those I like to emulate.
What has been your most rewarding experience during the writing process?
Like all struggling writers, getting published. More specifically, my novel The Corydon Snow being nominated for Best Work of Fiction for 2011 (winners to be announced in October) by the Military Writers Society of America was a big thrill.
Were any of your books more challenging to write than the others?


They all had different challenges, but the research that went into Snow was extraordinary. The story takes place on a merchant vessel during WWII, and follows the course of the Pacific battles to the letter. .I learned a lot writing that manuscript. The book is still dear to my heart.
How do you develop characters?


I’ve learned, through many rewrites how not to develop them. If I could describe it in a few words, I’d say I’m patient in their development. If I try to paint a picture too soon , I wind up ‘telling’, rather than ‘showing.’ I like to make them human with real foibles and fears.
How do you choose your setting?


Again, it depends on the story. In The Faircloth Reaction, I needed a university setting. My protagonist was a grad student in Chemical Engineering. NC State, in Raleigh, was close enough for me to visit for a day to do some research.
For Brink, I wanted a high tech area of the country and chose San Jose, CA, in Silicon Valley.
For Bad Medicine, it was the setting first and the story later. I thought St. Joseph Island such a unique and interesting place, there should be a story to go with it. Its proximity to Michigan did the trick.


How does your environment/upbringing color your writing?
There is no doubt that my chemical education and background in chemical marketing has colored my writing in Faircloth and Brink. My military experience certainly aided me in Corydon Snow, even though I was Army as opposed to Navy.
I’ll say this: Having spent a career traveling around the world for business, and experiencing many varied cultures, has enriched my writing, a gift to which I am most grateful.
We all know how important promoting our work has become. How do you get the word out both off and online?

I’ve got to admit, I could and should give this subject more attention. I have an Author’s Page on Facebook, and I try to keep my website active, and attractive. Beyond that I’ll send press releases out on my new books, and have been moderately successful with local newspaper coverage. Unfortunately, the big market papers are not giving much attention to writers for independent publishers. 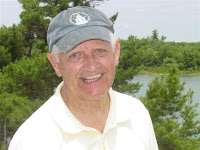 I’ve had moderate to good success with my two book signings, and have an interview in the works with an Ontario newspaper about my last book. Does it result in mega sales? No. At this point, after four books, I work on establishing my brand with the thought to someday get a retainer from one of the major houses. If that day never comes, I will consider my writing worth every minute of the hard work it demands.
Well, we wish you continued success and many more signings, Richard! I hope to see you at Cape Fear Crime Festival in Wilmington in February.