do you know Johnnie Lewis?

Johnnie W. Lewis was born on an Army base in Kentucky, to a Naval Chief Petty Officer and his telephone operator wife. That incongruous beginning was only a portent of the chaotic things to come to the little girl who was named for her father (instead of him giving his name to one of her four younger brothers!). Seventeen different school registrations before high school graduation gave her a rather "well-rounded" background from which to draw her continual string of stories.

Johnnie and her husband (always called "Better Half" in her writings) have been married more than 40 years and live in suburban Atlanta in Marietta, Georgia, near their daughter (always referred to as "Baby Girl"), son-in-law and PERFECT grandchildren (one of each), and their son (Little Fella) and his fiancee. "Critters" of every species live inside and outside their home and serve as a well-spring of inspiration for the fun, love and laughter in Johnnie's writings, whether those writings take an educational or tongue-in-cheek or romantic or whimsical direction.

Welcome to the blog, Johnnie. 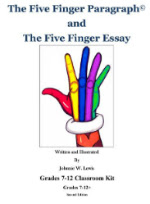 5 or 20, take your pick!  I’ve only written 5 books, but because The Five Finger Paragraph is a graded series for all grades, with a classroom Kit, Teacher Edition, and Student Edition for each of 4 different grade groupings AND Homeschoolers, that parlays into..., let me see..., 3 + 2/5..., 6 + 9 / 13, carry the 2..., 20 books!  All of The Five Finger Paragraph books really are separate books, since each addresses the needs and capabilities of the age groups it encompasses.  Three books (Kit book, Teacher/Parent Edition, and Student Edition) for each “grade grouping”:  Grades K-4, Grades 2-6, Grades 4-8 and Grades 7-12.  That’s 15 books right there.  Two of the others (in The Writing Police series) are children’s picture books, one is a compilation of tongue-in-cheek reminiscences about life above and below the Gnat Line, and the last is my first novel, Hampshire House.

Kate Brockett was raised in an orphanage, but nothing she ever learned there could have prepared her for her first position outside the Home.  Lord Clayton Bingham had requested her specifically to come and be the governess to his nine-year-old twin boys, but why?  She didn’t know him, didn’t know Hampshire House, knew no one this part of Leicestershire, so why was she going to this spooky place?  Mrs. Hudson was the cold, heartless housekeeper.  All of the maids and crofters showed the appropriate deference, but from the moment she arrived at the gatehouse of the manor house, someone had been trying to harm her, possibly kill her!  Who could it be?  Clayton?  Mrs. Hudson?  Someone from outside the manor house?

Surely it wasn’t Clayton!  His amorous attentions after she twisted her ankle made her head spin, heart pound, and awakened feelings in her that she didn’t know existed, in spite of his hateful cousin, Felicia.  Kate’s duties as governess were expanded to housekeeper when Mrs. Hudson was discharged, and once she was gone, Kate thought she was safe.  Until the attempted rape by parties unknown, and the fire in her bedroom, and...

The teaching abilities, the fiery spirit in Kate, the hard childhood...,  There’s a little bit of me in almost every character, including the vain and hateful Mrs. Hudson, the housekeeper! 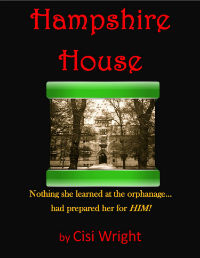 I wrote Hampshire House 24 years ago.  Had a baby, no computer and an old Royal typewriter.  Rejection by Harlequin nearly killed me, but I just hung on to that manuscript, KNOWING that it was a winner but the company just didn’t like the fact that it wasn’t FULL of sex.  Pulled it out last year, edited and redirected some of it, put it all into the computer, and published it last fall as an ebook on Amazon.  Responses prove that Harlequin doesn’t have the market cornered on romantic mysteries.

I don’t deliberately travel to get inspiration, but I draw inspiration FROM my travels.  The last time I was in England was 39 years ago, yet Hampshire House, set in pastoral England of the late Victorian age and written 15 years later, came FROM the memories of that trip.

The same “old” tried and true stuff you’ve heard from every “writing teacher” is the best advice.  (1)Write every day, SOMETHING, even if it’s an inventive grocery list.  (2)Write WHAT you know.  If you know car engines, don’t try to be funny writing about hair styling.  Write about car engines.  (3)Write when your MUSE is alive.  Writing in the morning because someone told you that James Michener always wrote in the mornings is BUNK if you’re a night owl.  Write when YOU have creative juices flowing, not when others do!  My MUSE wakes up at about 11:00 p.m., so I write from then until I don’t realize that my head’s on the keyboard.

On sticky-doos all over the house.  I get an idea, write it down on a post-it note, stick it to the wall.  It’ll fall off eventually.  If I pick it up and STILL like the idea on the note, I’ll tape it back up there and then put it on my “to-do” list.  If I don’t like the idea anymore, File 13 (trash).

I have two novels in the works:  Lae of Auwon (cave-man setting and time period) and The Forgetting Wash (futuristic thriller).  I also have 2 more books in The Writing Police series “on the drawing board,” literally.  I have to draw the pictures first, then write the book around them, more or less.  The last in my “line-up” is a novelized version of a true story (because I won’t be getting permission from the family members still living), of a woman in my hometown of Cordele, GA who murdered five members of her family with arsenic poisoning.  Was she crazy?  Or just damn mean?  You’ll have to read Murdered by Love to find out!

People can learn about me by visiting my website at http:www.acloudproductions.com or visiting Amazon.com, BN.com, Kobo.com or Smashwords.com and inputting my name, Johnnie W. Lewis, or pseudonym Cisi Wright.

Thank you for interviewing me, Susan.

Nice to get to know more about you, Johnnie.