Claire Applewhite is a graduate of , where she earned an A.B. in Communications and an MBA. Currently an adjunct professor at the , her published books include The Wrong Side of , Crazy For You, St. Louis Hustle, Candy Cadillac and Tennessee Plates. She has served as President of the Missouri Writers Guild, Vice-President of Sisters in Crime and as a Board member of the Midwest Chapter, Mystery Writers of America. She is actively involved in other writers’ organizations, including the St. Louis Metropolitan Press Club. For details see: www.Claireapplewhite.com.

Claire, it's great to have you back on the blog. Congatulations on the new book!

I live in , located in the heart of the country. Founded by French traders, the city possesses a rich history as “the Gateway to the West.” Nevertheless, it has been classified as one of the most dangerous cities in the Most of my stories are set in St. Louis, and are influenced by economic, racial, gender, education and employment issues.

I have written seven books. Of those, five are published. 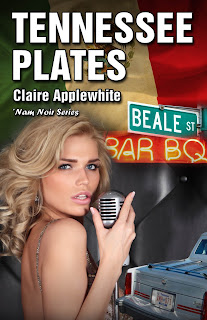 In ‘68, the hot smoke and cold eyes of ‘ stalked ELVIN SUGGS. Now, a blonde in a tight dress and a silver Cadillac has captured his heart, and he doesn’t want to run. Lonely and eager, he trails the temptress with a shady past, rife with corruption and lies—the girl with the Plates.

I’ve heard it said that no one can write authentically with their hands tied up behind their back. In other words, I think an author must forget themselves and let the characters talk. I strive to do that.

Do your characters take on a life of their own?

I think an author must climb into a character’s skin and view the world through their eyes.
Which is your favorite?

My favorite is the character who owns the viewpoint in the scene under construction.

An awesome response, and so true for me as well.
What challenges did you face while writing this book?

Tennessee Plates concerns reconciliation with past demons. The hero finally confronts the worst times in his life, and exposes them, so that he can find peace. A major challenge existed in the balance between tragedy and humor.

Do you travel to do research or for inspiration?

I love to travel because I am very interested in other people and their traditions. I travel for both research and inspiration. Can you share some special places with us? , , , , , , the Badlands are all intriguing places with their own personalities. I love Southern cities, but I am also fascinated by deserts.

What do you think is the greatest lesson you’ve learned about writing so far?

Writing is much like acting in that the author must forget him or herself, and assume a new identity in order to express another’s viewpoints.

What advice can you give new writers?

Don’t worry about what people will think when they read your writing. If you do, you won’t get your best work.

I tend to collect newspaper clippings in a box and look through the box when I am plotting a new book.

Where can folks learn more about your books and events?
Amazon.com, Goodreads, and my website, www.claireapplewhite.com.

They are all available in both formats at Amazon.com.

Claire, thinks for taking the time to tell us about the new book. St. Louis is a beautiful city and I hope to pass that way again.

Come on over any time, Susan.