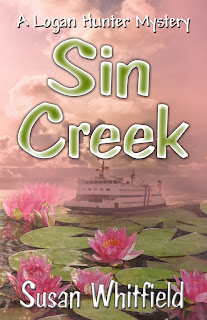 I am so excited to introduce you to Sin Creek, my latest Logan Hunter Mystery. Linda Houle, co-owner of L&L Dreamspell, did a fantastic job of bringing the book's content to life on the cover. Hats off to you, Linda, and also to Lisa Smith, who edited the book.


Digital formats are now available at http://www.fictionwise.com/ and on http://www.amazon.com/. The print version can now be purchased through my site, http://www.susanwhitfieldonline.com/ if you have PayPal, or at http://www.barnesandnoble.com/ and other sites. It's exciting to know that fans are already ordering the ebook and others are waiting with baited breath for a hard copy. I got Sin Creek just in time for my birthday. What a great gift!

Here's a teaser:
The Cape Fear River snakes through eastern North Carolina past the stunning port city of Wilmington, and sidling up next to it is Gator Creek. Some call it “Sin Creek”, a sliver of water where wickedness and decadence take precedence over decency.

“This action-packed mystery will keep you turning pages until its shocking end.”
L.J. Sellers, The Sex Club and Secrets to Die For

“…Susan Whitfield offers a strong commentary on some of the dangers of college life. Her protagonist, Logan Hunter, gives a strong telling of the story from the initial meeting with a dead girl’s parent to ending up on The Fearsome Ferry, a happening spot that would bring shivers to any parent with a kid in college. Lickety-split pace and effective description give the reader the feeling they are conducting the investigation right along side Logan. If you’re a fan of mysteries, this one is guaranteed not to disappoint. If mystery’s not your genre, make an exception with Sin Creek. Like the Cyclone at Coney Island, Sin Creek is gripping and intense, yet an enjoyable ride.”
Mark Rosendorf, The Rasner Effect
Posted by Susan Whitfield at 10:46 AM No comments:

This is Peter's last bookmark. I'd like to thank him for sharing so much information about writing. I wish him the best year ever!

Hi, Susan and followers of this blog. Today let's talk about setups and payoffs.


In writing fiction you can do anything you want, fly like superman, get shot in the chest and live, have a beautiful person walk up and ask for a sexual assignation, anything, and make it sound logical, so long as it's set up properly. This is one of the most important topics in fiction writing that is often overlooked.

The success of any book depends on the finesse with which the author sets up each payoff, sometimes called foreshadowing. This is something we've alluded before, but which is important enough to be taken up as a separate subject. For instance, let's take a denouement paragraph in a made-up book's last chapter that hasn't been setup:

Marsha felt her head slam against the butcher-block island as John bent her back across it. She had always liked that feature in her kitchen. His body pressed her down. Fear gripped her as she knew from past newspaper articles that John was a murder and was intent on brutally killing her. As he grabbed her around the neck, smashing her head against the counter, she fought to hold on and suddenly remembered the ten inch chef's knife she kept at the side of the island to cut vegetables. Desperately she reached around for it. She felt the handle, gripped it, then plunged into John's back.

Can you see the trouble with this? We, as writers, have to take the time to show the reader there is a butcher-block island in the kitchen. We have to mention the past newspaper articles to show John is a killer. And 'suddenly remembered' a knife when it is desperately needed? This is like divine intervention. It all stops the action, stretches credibility, and has the feel of being made up as the writer went along, which, of course, it was.

The rule of setups and payoffs is to set up something twice when it is subtle, in case the reader misses it the first time, or once with a BIG show, before playing it in a payoff.

So how would we do that? In chapter two Marsha talks to her lover while cutting vegetables on the butcher-block island for dinner and ends up putting the knife in the side holder. The attention is on the conversation, however, not the action, but subtly we let the reader know about the butcher block and the knife. In chapter eight, Marsha admonishes her son for using the chef's knife in the living room to cut string and returns it to the butcher block. Again the attention is the action between the son and Marsha, but if the readers missed the knife in the butcher block slot the first time, they know it now, and if they did catch it, it's a logical action to replace the knife where it belongs. We work out a similar scenario for the newspaper articles of the killer in different chapters. Now, with everything set up, let's see how the scene plays:

Marsha felt her head slam against the butcher-block island as John bent her back across it, his body pressing her down. He would kill her. That certainty flashed in her mind as she groped for a weapon. He smashed her head down again. She fought to hold on as she felt for the the chef's knife in side slot of the butcher block. She felt the handle, grabbed it, and in one fluid motion plunged it into John's back. Goodbye, John.
That last sentence I just throw in. But see how much faster the motion flows? The paragraph probably should be lengthened for clarity and suspense--I cut it short--but the essential thing to note is that we need no explanations to get in the way of the action.

There is one major caveat to this. If mentioning something twice is good, mentioning it three or twenty three times has to be better, right? No, folks, that's telegraphing it, like saying--look, nudge nudge, knife. So, over-setting something up is as much a problem as not setting it up at all.

If we want our story to flow seamlessly, we'll not only use setups and payoffs for major things, like the chef's knife above, but for minor events as well. Way back in BookMarc #7, in talking about first drafts, we mentioned how we suddenly needed a bar scene in a restaurant. This actually happened as I was writing Killing Thyme, the second of the Jim Dandy Elderhostel Mysteries. If I wanted the novel to flow as if it were happening before my readers' eyes, explaining after the fact--the restaurant had a bar I hadn't notice before--wouldn't do it. I had to go back to the first time Jim entered that restaurant and add a line about seeing the bar. Later, when he goes to the restroom, I added a couple of words like: he passed the door to the bar. Those two lines, spaced at each end of a chapter, brought the reader right into that bar later on w/o any needed explanation.

We can also use negative setups. In one of my pre-and-never-to-be-published books, I setup the unlikely killing of an important man by having someone say "no one would be stupid enough to try to kill him with that many bodyguards around." Do that a couple of times and we get an 'oh yeah' reaction in our reader's mind.

A perfect example of using setups and payoffs is the movie, Medicine Man, with Sean Connery. I recommend renting this movie to every writer I know. Watch it once to see how well it works for entertainment. Then watch it a second time with a pad and mark down every event that takes place, even minor things from the opening scene of burning trees. Nothing is left to chance. Each event is subtly shown, shown again, setting up the watcher to be ready to accept each event as it is finally paid off.
Now you might be saying to yourself, this will take away the suspense at the end. Well, then, go rent Sixth Sense and do the same thing, only don't watch the director's cut until the second time through.
From the beginning BookMarc we've stressed how "easy reading is hard writing." If we want our books to be easy reading, if we want to scoop up our readers and carrying them along in the moment, we'll take the time and make the effort to setup every payoff.

That said, Peter and I both hope readers gleaned a few gems from these 30+ bookmarks and will put the information to good use. I look forward to reading a multitude of wonderful books during 2011.
Posted by Susan Whitfield at 8:00 AM No comments: