Laurie Stevens: The Dark Before Dawn

Laurie Stevens has written for the stage ("Follow Your Dreams"), the screen (Chris Isaak's Guide to Jazz Fest) and a novel, The Dark Before Dawn, the first in a psycho-thriller/detective series based in . It was awarded the Kirkus Star and named to Kirkus Review's Best of 2011. Psychology and forensics interest her immensely so the book is rich with both. Lauire and her husband once snuck into the morgue to do research on the book and one of her favorite pastimes is to pick the brains of therapists. "Believe me, they love to talk like anyone else! I'm sure most of the officers at the Los Angeles County Sheriff's substation think I'm insane, but I do get a lot of good information there."

I bet you do, Laurie;-) I usually do my best sleeping in the dark before dawn, but I have a feeling your book will change that. LOL.
Where do you live, and how has your environment affected your writing?
I live near the outside of and I love exploring those hills. It's the perfect setting for the book - being so close to a huge metropolis and yet filled with nature, beauty and the nearby ocean.  The people you encounter run the gamut from New Age artsy canyon people to movie stars and deluxe snobs to suburban soccer moms. Add all of these types to an abandoned movie set or an historical adobe found in the mountains, and I get much fodder for my muse.
How many books have you written?

Shhh. I've written 2 but The Dark Before Dawn is the first published.

Give a short synop of each book, please.


The first, Autumn Leaves is about my grandfather and I. He was a European war orphan at 13 years old, who eventually made a success of himself. Me, a silly 20-something filled with angst, used his stories of survival to put in perspective my own American upbringing, and used his advice to get through a difficult decade of self-discovery.
The Dark Before Dawn revolves around Los Angeles Sheriff's detective, Gabriel McRay, who is fired from his job for police brutality.  When a serial killer begins leaving personal notes on the bodies of his victims addressed to Gabriel, he is reinstated in the hopes of "luring" in the killer. It soon becomes apparent that the killer's identity lies within the blocked memory of a trauma from Gabriel's own childhood. Gabriel then must run two parallel investigations. The first: a dark journey into the terrifying recollections of his past and the second: the hunt for a serial killer who seems to know more about Gabriel, than he knows himself.
What sets your book apart from others?


Readers ask me about the research I did, especially from the psychological aspect.  Then many of them will usually divulge something deeply personal that affected their lives, which makes me surmise that the book encourages folks to delve into their own darkness in order to "see the light."  Maybe it's a sort of demented self-help book.
Is it available in print, ebook, and Kindle formats?

http://www.amazon.com/The-Dark-Before-Dawn-ebook/dp/B005FM2F38/ref=tmm_kin_title_0?ie=UTF8&m=AG56TWVU5XWC2&qid=1328209066&sr=1-1
http://www.barnesandnoble.com/w/the-dark-before-dawn-laurie-stevens/1104216079?ean=9781456450113&itm=4&usri=the+dark+before+dawn
http://www.barnesandnoble.com/w/the-dark-before-dawn-laurie-stevens/1104216079?ean=2940011460289&format=nook-book&itm=4&usri=the+dark+before+dawn
What do you think is the greatest lesson you’ve learned about writing so far? What advice can you give other writers?
Forget the invisible judge looking over your shoulder.  Accept the fact you are a creative artist and writing is what you do, no matter what. Embrace the creative soul you are - revel in it.  It's a gift. If you work to make your work the best it can be - the cream will rise to the top.

Can you tell us your writing goals/projects for 2012 or beyond?

This year, the second in the series will be released: Deep into Dusk.


Meanwhile, The Dark Before Dawn has been approached by a film company for option, so we'll see how that goes.
Wow! Lucky you. 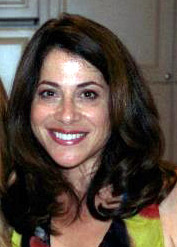 Thanks Susan, for the opportunity to appear on your site!

Nice to have you over, Laurie. I wish you continued success, and let us know if there's a movie in your future.
Posted by Susan Whitfield at 8:00 AM 3 comments:

First and foremost Janet is an epic fantasy author. She is the founder and the creative force behind JLB Creatives, a subsidiary of her and her husband’s company Multi-Tech Productions, Inc. Together she and her husband have co-authored non-fiction books and been published in trade specific magazines regarding technical theater, production, and audio visual. They have produced and directed everything from full scale productions, to festivals, to haunted houses, and beyond. Traveling the nation they have spoken at international conferences and served as a facilitators regarding live events - production coordination - and technical theater. This dynamic husband and wife duo has even had their moment of fame, appearing in TV commercials and spread ads as local talent. 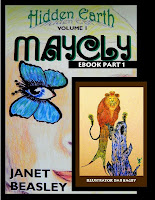 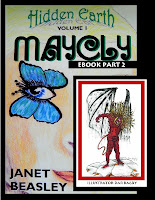 Please tell us about the Hidden Earth series.
Synopsis for HIDDEN EARTH Series Volume 1 Maycly:
Maycly is a world everyone longs to experience, but for Iona, left alone to fend for herself, Maycly has become a fading dream. After years of endless searching for her missing family, she had all but given up hope. But the Grand Wizard, SUL, had a plan.
An epic tale of Good versus Evil, Maycly is filled with adventure, trials, love, and epic battles, along with fantastic flora, creative creatures, and characters that come to life. Will Iona discover her true destiny? Will she ever find her missing family? Is Maycly bound to an existence of Evil for eternity? What will happen to Earth? Only the tales of HIDDEN EARTH hold the answers.
What sets your book apart from others?
Maycly is a fresh new way to deliver epic fantasy. It holds the key elements of quest, love, trials, and epic battles, but it differs from your typical style characters. You won’t find orcs, elves, or faeries - but rather vauhlpeezies, chukkons, and sprites. Maycly is filled with over 70 illustrations drawn by my full time illustrator, Dar Bagby. We make quite the sister team. Maycly is a timeless tale of good versus evil. Typical you say, but the battles take place on the planet Maycly where a vast majority of the inhabitants cannot die, while other inhabitants are not exempt from death and have never experienced the tragedy of losing loved ones. I’ve written Maycly with more than one goal in mind. The entire novel was crafted with a film in mind, yet I worked diligently to create 60+ chapters that could stand alone as TV episodes should it be discovered.
Is it available in print, ebook, and Kindle formats?
The paperback released February 26, 2012 and includes all three parts, black and white illustrations, family trees, teaser recipes, and other exciting back matter. The paperback will truly be a collectors item. This is due to the beautiful layout done by graphic design professional Connie Thompson (author of A Fascination with Feathers released June 2011). The ebooks are slated for release sometime during the week of March 11 if all goes as planned – but we all know how things can pop up when uploading ebooks. Each ebook for Maycly will be a separate part, and will contain color illustrations and corresponding back matter to what is revealed in that particular part.
What has been your most rewarding experience during the writing process?
The most rewarding experience for me would have to be helping others along the way. I truly enjoy promoting my fellow authors, and helping them conquer the most difficult tasks we all as authors (traditionally published or indie) face, those being platforms and promotion.
We all know how important promoting our work has become. How do you get the word out both off and online?
For me online promotion comes as second nature. I enjoy social networking and have met some of the most talented authors and artists from around the world. I have the usuals: a Facebook Fan Page, the JLB Creatives Blog, I tweet, and comb the web searching for quality content to share. I also have a Flickr.com site where people of all walks of life may download as many of my scenic nature photos as they’d like to use on their blogs, websites, brochures, business cards, and more. It’s my way of giving back, my pro bono marketing, for my fans both current and future. Offline is the most fun for me. I love to meet people face to face and discover what they have to offer in life. Exhibiting at local library events and hosting book signings at smaller book shops, restaurants, and other community oriented places are some of the venues I enjoy spreading the news about my books. I’m currently in the process of setting up book tour with about 7 or so stops as we travel this summer from Florida to the Upper Peninsula of Michigan.
Can you tell us your writing goals for 2012 or beyond?
2012 holds the promise of many things that will coincide with Maycly. There will be two companion books being released. The first: a full size, full color illustration book complete with detailed descriptions of 60+ illustrations including ten maps. The title of the illustration book is The Chukkons Say, “Ye Need ta Be a-Seein’ Maycly.” The second companion book will be a cookbook. It will hold menus and recipes from the the restaurants on Maycly. All of the recipes will be able to be prepared and consumed here on Earth. It will also contain short bits regarding the history of the restaurant owners, along with photos and illustrations. The title of the cookbook is “More Than Grilled Cheese and Tomato Soup.” And as if that’s not enough, fans are now able to shop for their favorite characters on T-shirts, hats, mugs, jewelry, and more. There’ll even be doggie apparel for Maycly’s canine fans. To top it all off I’ll be continuing to write Volume 2 with the goal being having it finished in time, slating a hopeful 2013 release.
Where can folks learn more about your books and events?
Amazon Maycly Paperback: http://www.amazon.com/Hidden-Earth-Maycly-Parts-Three/dp/0984881301/ref=sr_1_1?s=books&ie=UTF8&qid=1330093987&sr=1-1
Amazon Author Bio Page: http://www.amazon.com/Janet-Beasley/e/B0067AK386/ref=ntt_athr_dp_pel_1
The best place to start would be www.HiddenEarthSeries.com for the novels

Keep up with my creativity at the JLB Creatives Blog
Like the JLB Creatives Facebook Fan Page
For FREE digital photos fans may visit Janet Beasley = JLB Creatives on Flickr
Follow me on Twitter @JLBCreatives
And if you’re into videos and book trailers I’d like to personally invite you to subscribe to the JLB Creatives YouTube Channel
Janet, thanks so much for taking the time to visit. I hope all of your endeavors are successful.
Susan, I appreciate the interview. I wish you success with your books as well.
Posted by Susan Whitfield at 8:00 AM 2 comments: