John Howard Reid is here today to discuss his writing. John, it's great to have you as a guest. Please give us a short bio.
I've spent a life tradein the book trade. I started off as a publisher's representative and gradually moved up the ladder to the editor's desk and the publisher's chair. Most of my books were originally published by the company I was working for at the time, although, with permission, I did sell at least three new books and dozens of reprint rights to rival firms. I also contributed many articles and thousands of movie reviews to newspapers and magazines. At one stage, I was the movie critic for two rival city newspapers. Of course, I used a pseudonym for one of them!

When did the writing bug bite, and in what genre(s)?
At the age of 18, I started off as a playwright and was moderately successful in my university years, but I soon realized that while actors were nice people to observe in a movie or on a stage, in real life they were not such pleasant company. The crunch came when I was assisting the producer and handied out a copy of my play to the various cast members. They all ran off, clutching my play to their breasts. And what did they do? Did they read my play to discover what it was all about? No! They all counted up their lines. And before you could say A.A. Milne, they were all racing back to the producer screaming that their roles were too small or that Jimmy Jack, who was only a featured player, had more lines than the stars.

Briefly tell us about your latest book.
Merryll Manning: Beachfront Holiday is the third and most recent title in the Merryll Manning series of mystery suspense thrillers. I'm attached to these books because they were the means of first attracting critical attention to my work. In fact, one of the later books, Merryll Manning Meets the Last Generation, was selected by The Sunday Telegraph newspaper as the "Best Novel of the Year".

Congratulations!
How do you determine that first sentence?

I don't think the first sentence in a novel is all that important. For a short story, yes. For a novel, no. What is important in a novel is (1) The title and (2) The front cover. Both must attract the potential reader's attention. This is why I now insist on publishing my own books. Admittedly, I have allowed other firms to publish Large Print editions and I must admit, I have been reasonably happy with their covers. But I was most displeased with the cover Angus and Robertson (a Rupert Murdoch company) chose for Merryll Manning Is Dead Lucky. Although the book received hat-tossing reviews far and wide, sales were poor. The cover was impossibly drab. The very opposite of eye-catching. Admittedly, the book did eventually sell out. But it took two years, and my contract was not renewed. By way of contrast, in the same week that my book was released, a thriller from another firm with an extremely colorful, attention-grabbing cover hit the book-stands. This book received only three or four reviews (all of them extremely negative), yet it had sold out within a month. And, would you believe, it’s still on sale in book stores everywhere (and now in its 23rd impression)? Good reviews in themselves do not sell books. Good writing does not sell books. Imaginative plotting, page-turning incidents and believable characters do not sell books. Covers sell books. And eye-catching covers that quote enthusiastically over-the-top catch phrases from reviews sell even more books!

I know a great cover attracts me. I don't like the drab ones either.
How do you develop characters? Setting?
Mostly I rely upon real people and real settings. Merryll Manning is me, not as I am at present, but as I was in the years when I served in the army. People who knew me then would describe me as very aggressive. I needed to be, because I am basically a loner. I was drafted into the army and I determined to make the best of it by finding out how the army operates. To do this, I needed to ingratiate myself with the officers, to make myself indispensable, to put myself in a position where they would rely upon me for advice. I succeeded. But after all that, would you believe, I still haven't written my army novel? I've made many attempts. So far, no success. The problem is that I have too much material. Too many colorful characters. Too many incredible incidents. But at least the character of Merryll Manning has emerged from that experience.

Do you have specific techniques you use to develop the plot and stay on track?
I wish I did. My method of creating stories and novels is to let the characters do all the writing. Unfortunately, once an author lets his characters loose, they tend to lead the story into all sorts of impossible dead ends from which they cannot be extricated. I have at least 50 novels and stories in this category. Occasionally, after a few years' meditation, I can think of a way to rescue them. Occasionally! I wish I had a dollar for every manuscript page stashed away in my overflowing suitcases, cabinets, linen closets and wardrobes.

What are your current projects?
I'm now working on (or rather re-working and revising for American publication) the fourth Merryll Manning novel, Merryll Manning On the Rim of Heaven. I should mention that although all the Manning novels could accurately be described as mystery-suspense thrillers, they can also be categorized in different sub-genres. I dislike repeating myself. Merryll Manning: Trapped on Mystery Island is a highly-charged "Ten Little Indians" in which the claustrophobic atmosphere of the island is deliberately so tense, it's almost overwhelming. Merryll Manning: The Health Farm Murders is likewise an Agatha Christie, but with a more detailed and more accurate setting (it is backgrounded against a real town), more colorful characters and more plot twists. Merryll Manning: Beachfront Holiday is a police procedural, but here too the hero is far more deeply involved than in most novels of this genre. Merryll Manning On the Rim of Heaven is both a small-town and an unlikely partners entry in which one of the principal characters from The Health Farm Murders not only makes a re-appearance but plays a substantial role.

Where can folks learn more about your books and events?
I have a Merryll Manning website: http://merryllmanning.exactpages.com/
There’s also a general site at http://johnreid.exactpages.com/. I welcome correspondence from readers at johnreid@mail.qango.com

Thanks for the interview, John. I wish you continued success with your Merryll Manning series.
Posted by Susan Whitfield at 8:00 AM 3 comments:

My guest today is another North Carolina gal, Diane Chamberlain. Welcome, Diane, and please tell us more about you.
I started writing nearly thirty years ago, when I was working as a social worker in a hospital. When I started, I thought of writing fiction as a hobby, but it soon became an obsession. It took me four years to write my first book, and four years more to see it published. Since then, I’ve written nineteen more novels.

Is there a message in your writing you want readers to grasp?
I want my readers to be entertained, first and foremost, but I definitely hope they will take away a message of hope, resilience, and the importance of family in all its varieties.

Briefly tell us about your latest book.
The Lies We Told is the story of two physician sisters, Maya and Rebecca, who are part of a disaster relief team. When they were teens, they witnessed the murder of their parents, and each of them carries a haunting secret about that event. Now, one of them is in a helicopter crash and presumed dead. . . and I don’t want to give away what happens next!

Do you think your writing has improved since your first attempt? In what way?
Oh, yes! I view my first book as a training ground, even though it won the Rita Award from the Romance Writers of America. Over time, my books have developed more suspense and mystery and less romance, but the main focus is always on relationships between family members and friends.

How do you develop characters? Setting?
I usually pick a setting that intrigues me or resonates for me personally. Often it’s an area I want to explore more, such as the city in The Lies We Told, Wilmington, NC. I loved it so much as I researched it that my next book is set there as well. As for characters, I employ some of the same techniques I used when getting to know my clients back in my psychotherapy days. Basically, I talk to them and listen hard to their answers. When they start to feel like real people to me, I know I’m on the right track.

I set my fourth novel in Wilmington as well. Beautiful place! I lived there when I was first married.

How do you determine voice in your writing?
I gave both sisters a voice in The Lies We Told. Maya is in first person, because I wanted the reader to feel closer to her. Rebecca is in third person.

How do you promote yourself online and off?
I have a very active blog at www.dianechamberlain.com/blog and I’m active on Facebook. If you’re on Facebook, too, please friend me! My website www.dianechamberlain.com has tons of information, including trailers of The Lies We Told and other recent books as well as contests and a printable booklist. I try to interact with my readers as much as I can.

Where do you write? When? What do you have around you?
I usually write at a coffee shop in the mornings. I need to get out of the house! In the afternoon and evening, I write in my office or if it’s a nice day, on the porch. My significant other is a photographer, so we both work at home, where we hang out with our two shelties.

Diane, thanks for dropping by. I'll have to get The Lies We Told. Good luck with it. 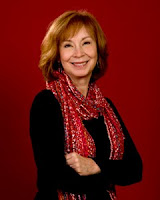