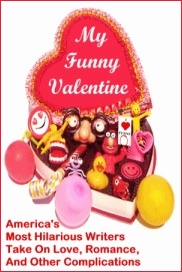 How does this blog cover a book that was conceived on an internet group, has forty writers, occupies a sales niche with a shelf life, and doesn't even take itself seriously?  This humor anthology bills itself as "America's funniest writers take on love, romance, and other complications," and that’s exactly what it offers.  No literary pretensions here: this pocket-sized book only wants to make you laugh.  Or at least chuckle, chortle or guffaw.  This collection of "Love Day" humor essays, jokes and cartoons was brought together by two writers already known for tickling ribs: Karla Telega has a highly-regarded humor blog as well as authoring the funny cozy mystery "Box of Rocks" while Linton Robinson was a co-perpetrator of "Mayan Calendar Girls," in addition to the scathing "The Way of the Weekend Warrior," based on his cult humor columns.
Both Karla and Lin contributed pieces to My Funny Valentine but are quick to note that other writers really power the book: writers who syndicate their columns, win contests, write for standup and television, produce programs, and pester people in subways.
I interview a lot of authors here, but aren’t you actually the editors of My Funny Valentine?
Lin:  Well, Karla and I both contributed pieces, but what makes this book so cool is that it was written by forty very funny writers, so there's a gamut of style and types of writing and humor.
Karla:  I have to check in the mirror each morning to see which hat I’m wearing. One day I’m writing, and the next day I’m trying not to squirt coffee out my nose while reading a story from one of our contributors.


Lin:  Editing gives a different perspective to writing.  I used to hate snotty editors who thought they were superior, and now I am one. Actually, I have edited publications before, just never funny ones.  Not intentionally funny, anyway.
Where did you find the writers?
Lin:  That was the main job on this project--and believe me, we were learning the job as we went along.  We posted public calls on many forums and sites, but many were people we already knew and invited personally.
Karla: I’ve gathered a bit of infamy in the online humor community, so we called on some contacts there. We didn’t have to resort to bars or houses of ill-repute, although Lin volunteered to check them out.
Other than "funny", how would you characterize the writing?
Lin:  One thing I noticed is that, although there are quite a few sweet and/or surrealistic pieces in what we think of as the "canon" of Valentine, a great many stories were from two viewpoints: women defying the stereotypes that Vday urges on their relationships, and men terrified that if they don't get the right present or do the right thing they'll end up sleeping alone and unconsummated in a Toyota.  This goes beyond cheap laughs (hey, ten bucks for a book is cheap these days) into sociological significance.  Since I'm not a sociologist, I have no idea what it signifies, but it's major, see?

Karla:  With forty writers, odds are good that there is some socially redeeming value mixed in with all the hilarity.


Who do you think would read My Funny Valentine?
Lin:  Two kinds of people, I think.  One kind would be humor fans, people who like funny books and pick up titles by Dave Barry or Sedaris or Grizzard or Foxworthy.  The other kind would be people who just want something novel as a Valentine's stocking-stuffer. One of our writers convinced us to do the Kindle version for the sort of last-minute panic purchase to avoid the doghouse, as is touched on several times in the book itself.
Karla:  I boil it down to: women who have bought Valentine’s Day power tools for the last five years running, and men who prefer not to be blinded by the perfume spritz-person (the politically correct term) at the department store.
Why did you choose humor as the topic of your imprint?

Karla:  I talked to several agents when shopping my own humor book, and got the same response: “This is hilarious, but you have to be a nationally syndicated humor columnist before a publisher will take it on.” It seemed outrageous that traditional publishers would turn their back on a whole genre. I skipped over self-pity and went straight to stubborn. If fresh humor was going to get into the hands of readers, some idiot(s) would have to champion the cause. “Some idiot,” by the way, is my job title.


And why Valentine's Day?  It's not what we think of as a funny holiday, particularly.
Lin: One thing our writers brought out, Valentines might be the most bipolar, ambivalent holiday of them all.  Most people feel the same way about Christmas and Thanksgiving and Halloween (other than fundamentalists and humbuggers) but a day that is all about love is just a set-up for touching on some complex emotions and attitudes.  But mostly we just figured people would buy it to give to their love objects.
Karla:  Besides, Christmas, Armistice Day, and Purim were already taken.


Were you friends or writing partners before editing My Funny Valentine?
Lin: Not really.  I knew Karla's name and had seen her work on a humor webzine called  The Flying Trapezezine, but our decision to do this together came out of a discussion about publishing on a writing forum.  We were talking about publishing and I think I came up with the question of, "Why don't we do it?"  And Karla was the only one who stepped up and said, "Yeah, lets."


Karla:  I actually ran a background check to make sure Lin wasn’t in witness protection, an international spy, or a Cubs fan.
Was it difficult for two independent writers like you to work together?


Lin:  Not at all.  And I'm not known as the sweetest guy in the world to work with.  Karla, on the other hand, is a dream to work with.  But what was spooky to me was how much somebody across the country was on my same wavelength.  We've actually come up with the same idea and mentioned to the other in crossing emails.  Even odder, it turns out that we shared a lot of background.  Both military brats, both graduated from University of Washington, both of us speak Spanish.
Karla:  My first marriage should have gone so well. What I most appreciate is the mutual respect. We’re both good listeners when there’s a disagreement.

How are sales going for My Funny Valentine?

Lin: Nicely, but it's hard to tell for sure.  We expect a last-minute flurry around the first week of February (followed by a drop off to zero until next year).  It's moving on Amazon and Kindle, but at least half the sales are coming from writers buying them at wholesale for signings and sales from their websites or standup gigs, and those sales don't show up on retail rankings.  These are POD books, but we now realize we could have gone to an offset run.  Next time we will.
Karla:  Marketing an “event” book leaves very little time for a learning curve. We’re pleased with the numbers, but there’s so much more we can take from this for future projects.


So you are planning to do more humor books?
Lin: Definitely.  Humor anthologies are our entire focus, though we might get into single-writer collections once we figure out what we're doing.  Our plans at the moment are to issue a call for contributors on March 1 and produce at least three more titles in 2012.

Writers interested in receiving calls, or humor fans who want to know when new books are available, can sign up for notices at http://myfunnybooks.biz/mail

The topic of our next book isn't yet carved into stone.  (eBooks and POD make all that carving unnecessary.)  We've rejected "My Funny Prostate Operation", "My Funny Rotten Junkie Teenager", "My Funny Post-Partum Suicide Attempt" and "My Funny Expense Account Cheating", but will come up with something as equally fabulous, we promise.


Do you have advice for humorists?
Lin:  Yes: quit clowning around and get serious.   Seriously, I think there is a strength in association and mutual support.  You see this in the networks of humor bloggers out there.  And--surprise, surprise—you’ll want to pursue anthologies like ours, McSweeney's, Chicken Soup.  Three of our contributors were offered assignments from publications on the strength of their inclusion in My Funny Valentine. Take every opportunity to get your name out there.

Karla:  Humor is so subjective. If you’re a new writer, don’t be discouraged by rejections. We’ve had to turn down some very funny pieces because they didn’t fit with the overall style of the book, or it was a subject that was already well covered. If you stick with it and you’re lucky, your book may grace the backs of millions of toilet seats around the country. See you all at the next humor conference: John Con II. 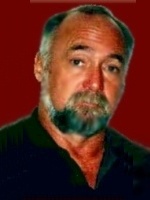 Karla and Lin, thanks for contributing humor to the blog. It's always appreciated.

Congratulations to Randy Rohn and artist Linda Houle for winning the Whitfield Book Cover Award by a large margin! 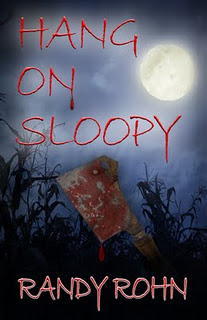 Are you a good juggler?

As I sit here working on a panel topic (Marketing) for the Cape Fear Crime Festival this weekend, I'm trying to figure out how I'm going to write, keep up with two blogs of my own, visit other blogs, arrange signings and conferences, update my web site, and....oh, yes! My family needs some attention as well. I'm curious about how you guys juggle the list of things we're all told we need to do each day, or at least every few days. Leave comments in the link below and someone will win a free copy of Just North of Luck, the second Logan Hunter Mystery.
Posted by Susan Whitfield at 9:32 AM 4 comments: