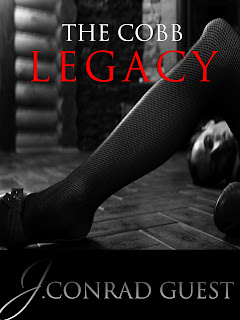 J. Conrad Guest is the author of five novels—January’s Paradigm, One Hot January, January’s Thaw (all based on the character, Joe January, a Philip Marlowe type private investigator circa 1940), Backstop: A Baseball Love Story in Nine Innings, and The Cobb Legacy—and a novella, Chaotic Theory. Backstop was nominated as a Michigan Notable Book in 2010 and was adopted by the Illinois Institute of Technology for their spring 2011 course, “Baseball: America’s Literary Pastime.” His short fiction, memoirs, op-ed pieces and sports articles can be found at a variety of websites; simply google J. Conrad Guest.
J. Conrad Guest finds his muse in a good cigar and a pot of coffee or glass of scotch, depending on the time of day. They’ve become part of his ritual, his creative process.

Where do you live, and how has your environment affected your writing?
I live in Michigan, where the long winter months make for a grand environment for writing. I live alone, which is also good for writing, which is a very solitary endeavor. I’ve had my heart bloodied and bruised several times—the warm and caring guy women claim to seek, tossed away in preference for the bad boy. But I’ve also bloodied a couple hearts myself and so my name is likely still cursed. Writing is therapeutic for me. I write largely about regret and the relationships between men and women and between children and parents. In short, I succeed in crafting happily ever after stories for my characters I can’t seem to write for myself.
Give a short synopsis of your most recently published book.

The Cobb Legacy spans more than a century. Baseball legend Ty Cobb’s father was killed, by his mother, a week before Ty became a major league ballplayer. Although she was acquitted on the grounds it was accidental, who can know what Cobb thought. His father, who was against his son playing ball, told him only not to return home a failure. He never did, but he did lament, after his playing days were done, that his father never got to see him play.


More than a murder mystery, The Cobb Legacy is the story of a man’s search to connect with his dying father while also coming to terms with an adulterous affair and impending divorce, and doubting that love with an old friend can be his.
What sets your books apart from others?


I probably rely more on personal experience—the disappointments I’ve encountered throughout my life—than most writers. I tend to write mostly in first person, which gives my work an almost autobiographical or memoir feel. I like to think this allows my readers to connect with my work more than books written from a purely fictional perspective. I also don’t follow a specific formula; I tend to mix several genres.
Is it available in print, ebook, and Kindle formats?

All my books are available as e-books, including Kindle and Nook, and several others as well as print—The Cobb Legacy will be available in print in May.

What do you think is the greatest lesson you’ve learned about writing so far? What advice can you give other writers?

The greatest lesson I’ve learned is to enjoy the process. I used to get too wrapped up in publication. Rejection letters were, to me, a reflection of my work, its value. When I learned to enjoy the creative process, I became a writer, and publication eventually fell into place.

My advice to other writers is not to be so quick to self-publish. Try to learn from your rejection letters. Sure, publishing is highly subjective—what one publisher or agent seeks may make another yawn. Publishing on a credit card is the easy way; but it also results in stagnation—one can’t learn the art of writing because one continues to make the same mistakes.


We all know how important promoting our work has become. How do you get the word out both off and online?
Oh, gosh, that’s a difficult question because I’m still learning. Promoting my work doesn’t come easily to me; I’d much rather spend my free time writing than marketing. But it’s a necessary evil. Even the monster publishing houses expect more from their writers. A few years ago I learned that in order to get anywhere I needed a website and a blog, so I’ve got both. The trouble is, so does every other writer, so it becomes an exercise in making mine different to separate myself from all the others, and that’s something that is ongoing and which I’m still learning. I try to do interviews elsewhere, like this one, but it’s difficult to measure whether or not they’re effective.
Funny story: I posted an excerpt from The Cobb Legacy on Good Reads, a lengthy diatribe on Romeo and Juliet, which has gone quite literally viral. It’s been picked up by dozens of sites and been viewed by thousands. My name appears as the source; but unfortunately none of my book titles accompany it, so I have no way of knowing how many readers may have discovered my novels through that venue.
Can you tell us your writing goals/projects for 2012 or beyond?
I’m currently shopping my sixth and seventh novels—A Retrospect in Death and 500 Miles to Go. The former takes the reader to the other side after the protagonist’s death, where he meets his higher self. The two of them analyze his past life, looking for the breadcrumbs that led to his unhappiness in preparation for his return to the lifecycle. The latter takes place in the 1960s, during the golden age of motor racing, and chronicles the efforts of a young man to achieve his dream of winning the Indianapolis, but at the cost of losing his childhood sweetheart, who is certain he will leave her a widow. It’s a story of the importance of, as well as the dangers associated with, pursuit of dreams.

I’m just getting involved with a collaborative novel with several other Second Wind Publishing authors, which will keep me busy through the first several months of 2012, and I have a couple of ideas for my next novel; but neither has gotten to the point where I need to set pen to paper.

Where can folks learn more about your books and events?
I can be found on Facebook, Red Room and Good Reads, and at my website: www.jconradguest.com.
Posted by Susan Whitfield at 8:00 AM 2 comments: