How Do You Determine Your Title?

Since I started my women's fiction a couple of years ago, I've called it The Goose Parade of Old Dickeywood. Recently as I edited and rewrote portions of the book, I began to wonder if the title works. The book is about lessons learned from geese, but that's not the main thrust of the book. Lifelong friendship is. My two main characters are going through menopause, marital stife, and health issues. They're sick and tired of it. The book calls attention to all the frustrations in their lives and all the antics and misadventures they get caught up in, trying to enjoy themselves in spite of Life's obstacles and stumbling blocks. I have decided that a better title is Slightly Cracked. That title covers the goose egg issue in the book and also could be used to describe either of these sassy ladies. I am happy with my choice. It is officially Slightly Cracked now or until a publisher changes it to something even catchier.

The Goose Parade of Old Dickeywood or Slightly Cracked

What do you think?

Have you changed the name of a book, or wished a book had a different title?

How important is the title to you?

Please leave comments for a chance to win a free signed copy once it's published.
Posted by Susan Whitfield at 2:23 PM 21 comments:

Award-winning author Hank Quense lives in Bergenfield, NJ with his wife Pat.  They have two daughters and five grandchildren.  He writes humorous fantasy and scifi stories.  On occasion, he also writes an article on fiction writing or book marketing but says that writing nonfiction is like work while writing fiction is fun.  A member of the Science Fiction Writers of America, he refuses to write serious genre fiction saying there is enough of that on the front page of any daily newspaper and on the evening TV news.
Zaftan Entrepreneurs is the first book of a trilogy.  In it, an alien mining ship discovers a planet that holds promise to be a mining bonanza.  Unfortunately, it is inhabited by humans, dwarfs, elves and other races and they object to the mining expeditions.


Zaftan Miscreants is the second book in the trilogy.  It is awash with unusual characters and filled with bizarre plots
Hank’s previous works include Tales From Gundarland, a collection of fantasy stories.  Readers Favorite awarded the book a medal and EPIC designated it a finalist in its 2011 competition.  His Fool’s Gold is a retelling of the ancient Rhinegold myth and Tunnel Vision is a collection of twenty previously published short stories.  Build a Better Story is a book of advice for fiction writers.


Hank has initiated a series of lectures and workshops to share his expertise in creating fiction and publishing books.  Create A Short Story is a 4 session workshop in which the participants design their own short story. He also gives a two-part seminar on Self-publishing a book and Marketing and Selling the self-published book.
Hank, welcome back. Please  give us a short synopsis of your new book.


This novel is Shakespeare's Worst Nightmare.  It takes two of the Bard's most famous plays, Hamlet and Othello, and recasts them with fantasy characters in a place called Gundarland.  Hamlet is a dwarf and Othello is a dark elf. If that isn't bad enough, these two tragedies are now comedies with Falstaff, Shakespeare's most popular rogue, thrown in as a bonus.  Both Hamlet and Othello are plagued by the scheming Falstaff, a human.
Hamlet is the Prince of Denmarko and is striving to start a private business -- bee-keeping -- to demonstrate his competence and independence from the court.  He is shocked to learn, from a ghost, that Clodio murdered his father.  Indecisive, he tries to balance his love of bees with his mother’s demands to help Clodio and the ghost’s insistence that he avenge his father’s murder.
Othello, using a tarted-up resume, is named to the post of Minister of Homeland Security in the city of Dun Hythe.  Once he assumes the post of Minister of Homeland Security for the city of Dun Hythe, he realizes his responsibilities are much greater than he imagined they would be.  He soon discovers his appointment was engineered by his wife’s grandmother who heads the local crime syndicate and demands that Othello award her contracts to rebuild the Dun Hythe’s walls

Falstaff is a life-long schemer and scam artist. He calls himself Sir John Falstaff since he won the title ‘Sir’ in a card game with the knight who had earned it.  A deserter from the army, he travels around the country with his batman, Poulet, searching for opportunities.  During the story Falstaff sees Hamlet and Othello as easy marks and gulls both of them.
How did you come up with this bizarre story?
I love rewriting legends and old stories.  As I see it, I'm bring them into the 21st century.  This novel was years in the making. I originally wanted to write a short story about Hamlet.  I also planned to write a spoof about Othello.  I tried for at least 3 years, but couldn't get the stories going, mostly because the plays are tragedies and to Shakespeare that meant the stage is filled with dead bodies in the last act, not exactly the stuff of humor.  About 18 months ago, I tried once again and failed to get either story going.  Desperate, I combined them to see if that gave me any ideas.  it didn't because there was nothing to connect the two main characters. Then I had another idea and added Falstaff to the mix.  Within seconds, everything clicked.  I knew the plot, I knew the ending, I knew the character interactions.  All I had to do was finish build the character sketches and write the first draft.
What’s the status of the book?


I originally planned to publish the ebook in April of this year, but the advanced reviews are so good that I decided to postpone publishing it while I try to get an agent.  If nothing happens by the end of the summer, I’ll publish it.
When do you accomplish your best writing?
In the morning.  I generally start writing around 7:00 AM after checking email and various web sites
Is there another book on the horizon?
I have five I want to write.  Two of them are ready to start the first draft, the others need more design work.  One of them, Zaftan Combatants, is the third book in the Zaftan Trilogy.  It's number two on the list.
After hours of intense writing, how do you unwind?
Red wine works great. So does reading other authors’ books.
Ahh, that explains it then. LOL.
Are your books available in print, ebook, and Kindle?


All of the above.
Where can we purchase these books and get more information about you?
I have buy links for each book on the Strange Worlds Online website: http://strangeworldsonline.com 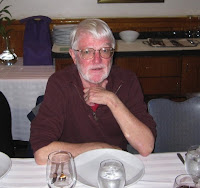