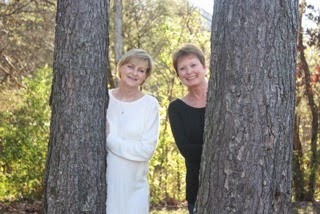 I met (via Internet) two of my favorite "sistahs" in Hot Springs, North Carolina, where my novel, Just North of Luck is set. Christy Tillery French and Cyndi Tillery Hodges aka Caitlin Hunter are a dynamic writing duo I "met" on Facebook and then in person at a writing event in Boone. These gals visit the setting of their first book, Hot Springs, NC. several times a year and meet at the Smoky Mountain Diner for lunch. I joined them. We love their food (yummy peanut butter pie!) and the friendly, laid-back atmosphere. A couple of months ago, they were there and were paid one of the highest compliments a writer can be given: the waitress told them they’d had several people come in who were visiting the town because they’d read their book. After lunch when they walked the main street of town as they usually did, their heads were in the clouds and their feet didn’t touch the ground once! It's my pleasure to interview these two sisters. If you haven't been introduced, sit back and get to know them and their writing a little better. Feel free to leave comments and questions in the comment section.

CC Tillery is the pseudonym for the two sisters, both authors who came together to write the story of their great-aunt Bessie in the Appalachian Journey series. Tillery is their maiden name and the C’s stand for their first initials.

One C is Cyndi Tillery Hodges, a multi-published author who writes paranormal and contemporary romance under the pseudonym Caitlyn Hunter.

The other C is Christy Tillery French, a multi-published, award-winning author whose books cross several genres. To find out more about her work, visit her website at http://christytilleryfrench.webs.com.

For more information on the Appalachian Journey series, the stories it is based on and the authors, visit http://whistlingwoman.wordpress.com.

Yum! This pie is the best I've ever eaten! It's so good to see both of you again.

Christy:  It's great to see you again, too, Susan.
Cyndi:    We appreciate the interview.

You're certainly welcome.
Please give a short synopsis of your most recently published book, Beloved Woman. 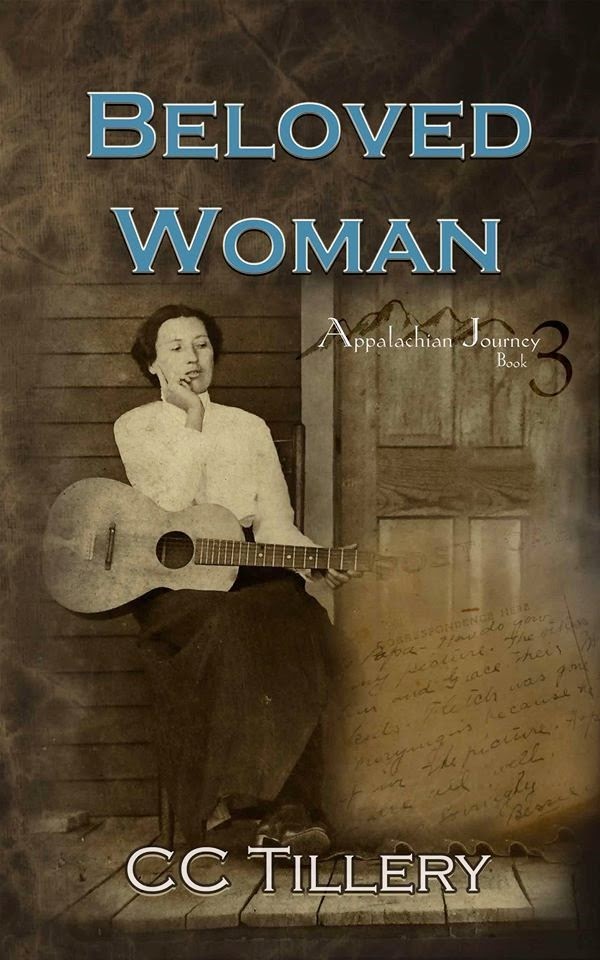 In the second decade of the 20th century, major world events resonate even on secluded Stone Mountain where Bessie Elliott lives with her husband Fletcher. There’s a great war, one that takes away many young men, including Bessie’s kin, some never to return. Bessie’s role of healer intensifies as she treats those suffering from the Spanish flu and tries to keep it from spreading further on her mountain. She defends a young woman who is in the middle of a controversy that threatens to tear their peaceful community apart. And she finds herself involved in the Suffragette movement as the women of North Carolina fight to gain their rights under the constitution.

Then when one of her family members makes an appalling decision, one that has the potential to damage a child, Bessie impulsively steps in to right the wrong.

Cyndi, what challenges did you face while writing this book?

One of the hardest things for us was handling the passage of time in the books. Aunt Bessie was approaching her 90th birthday when she died, and while she had an interesting life, there were naturally what we call “down times” where nothing much happened. In a few places we faced moving the story over great chunks of time without bogging the narrative down. The transition from one year to several years later is always a challenge for us and we’re still struggling with that. Also, merging fact and fiction since it’s important to stay true to the stories and, of course, to be accurate with the history. In several places, we found we had to adjust the timeline a bit to make the story flow better. For instance, in Beloved Woman, we‘ve brought our dad into the picture ten years early, being born in 1918 when he wasn’t actually born until 1928.

Other than trips to Hot Springs, do you travel to do research or for inspiration? Can you share some special places with us?

Christy:  Our books are about our great-aunt and -uncle who lived in the mountains of western North Carolina, first in the small town of Hot Springs, and after they were married, on Stone Mountain between Old Fort and Black Mountain where Uncle Fletcher’s family was from. We both live nearby and we’ve taken many trips to both areas to research and promote the series. The people we’ve met and talked to have been incredibly welcoming and helpful. Since Hot Springs is about half way between our homes and we love going there, we visit as often as possible. It always brings us closer to Great-Aunt Bessie somehow and we feel as if we’re walking in her footsteps when we visit the places we know from family stories she went during the time she lived there.
Where do you store ideas for later use: in your head, in a notebook, or on a spreadsheet?

Cyndi:  Before we start writing each book, we do a “Purge” file with historical and social timelines and notes about the time period we plan to cover in the book. We also keep an Appalachian Journey Notes file on our computers which includes genealogy, stories we’ve been told by Daddy, Aunt Bessie or other family members, a list of Southern sayings for the chapter headings, superstitions, and snippets of information about the setting which we find during our research for each book. That file is in a constant state of flux as we add, delete, or correct as needed.

Christy: Online, for the series, we have a Facebook page (https://www.facebook.com/appalachianjourney), a blog (https://whistlingwoman.wordpress.com/) and our Amazon Author Central page (http://www.amazon.com/CC-Tillery/e/B006LN2L66 ) and we try to post as much as possible to all of them. Offline, we attend many festivals in the area and give talks and/or readings at the local libraries and welcome centers.

Our biggest success has come from our readers and their generosity in sharing their thoughts and feelings about the books which are all three bestsellers on Amazon and Kindle.

Cyndi:  Thanks to the great sales of the first book, Whistling Woman, we were offered a contract last year for a German translation, Madchen, die pfeifen, which was released last November. Neither of us speak German so we can’t tell you how it was promoted but judging from the fact it has made three Amazon bestseller lists, the publisher did an outstanding job. We were also offered a contract for the French translation (no title yet) which is in production and should be released later this year.

Christy:  We are currently working on the fourth book in the series, Wise Woman, and hope to have it written and released by the end of this year. While all the books are close to our hearts, this next one is, in a way, the most special of all because this one tells the story of our dad, who is the inspiration for the series, and his time on the mountain with Great-Aunt Bessie and Great-Uncle Fletch.

Cyndi:  Yes, all three books in the Appalachian Journey series are available in Kindle ebook or print. The first two are also available in audio and the audio of Beloved Woman should be released within a few weeks. The easiest way to find our books is to visit our blog, https://whistlingwoman.wordpress.com/ where we have the covers in the sidebar and readers can click on each cover to connect to the book’s page on Amazon or they can go to our Amazon Author Central page, http://www.amazon.com/CC-Tillery/e/B006LN2L66, and click on the covers there.

Okay, I have to ask:  do you two ever argue over the content? How difficult is it to work with another person?

Cyndi:  Sorry, no arguments, only a slight disagreement about the tone of the books. The good thing about writing with someone you're so close to, is you can simply tell them what you think, discuss the difference and then come to a decision. That's how it is with us, and though we haven't had any arguments (aside from whose name would come first on the book which was easily settled by going with a pseudonym), we have discussed many, many aspects of writing historical literary fiction vs. contemporary fiction.

Whew! I'm glad you get along so well. I figured that because you're both sweetie pies, but thought I'd ask just in case there was drama to unearth. LOL

I wish both of you continued success and hope to see you again soon!

Christy:  Maybe we can meet here again next year.

Sounds good to me.

Posted by Susan Whitfield at 8:00 AM 5 comments: