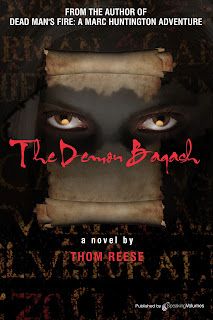 How many books have you written and in what genre(s)?
This is a busy year for me. My first novel, a supernatural thriller titled THE DEMON BAQASH, was released in January 2011, followed in February by my short story collection, 13 BODIES: SEVEN TALES OF MURDER AND MADNESS. I’ve also been contracted to write two books based on my audio drama series, MARC HUNTINGTON ADVENTURES. These books are action/adventure novels following the exploits of recovery specialists Marc and Dana Huntington as they traverse the globe to recover stolen treasures and missing persons. The first novel, DEAD MAN’S FIRE, should be out late this summer, the second, CHASING KELVIN, in early 2012. As well, my novel, THE EMPTY, about a race that has no genetic matrix of their own and must infuse DNA from humans and animals alike, is set for a 4th quarter 2011 release. I’m in the midst of writing CHASING KELVIN right now and am throwing in plenty of twists and turns as well as dabbling on the fringe of horror/sci-fi concepts while keeping the overall feel true to the thriller genre. I think it’s going to be a fun ride.
Wow! You certainly are busy.
Thanks for taking time out to visit.

Tell us about The Demon Baqash.
There are two releases which came out almost simultaneously. THE DEMON BAQASH follows Trent Troxel as he tries to put his life together after personal and professional failure. He’s approached by Baqash, who claims to be a demon of hell. The demon leaves countless ancient artifacts with Trent, among them strange writings on an unknown substance. Trent soon learns that these are the demon’s own journals detailing his fall and subsequent life as one of the damned. Trent and his family are soon drawn into the demon’s scheme to undermine Satan with the goal of redemption. But there are other even more sinister powers at work, devious powers, and soon Trent must fight not only for his family’s survival but for their souls as well.
13BODIES is a collection of short stories based on my audio drama series, 21st Century Audio Theatre, which began as a weekly radio program. Several of the audio dramas have since been published by Speaking Volumes. I was then asked by my publisher to write this short story collection based on the dramas. The book is a true mixed bag, there’s sci-fi, horror, suspense, psychological thrillers, even comedy. My favorite of the stories is FAMILY LEGACY, a tale about a family in which the greatest honor that can be given is for a family member to kill another family member with great creativity and style. There’s another story about a vegetarian vampire, some murders, a Twilight Zone style sci-fi. Every story takes the reader to a different place.

I think the Marc Huntington books have brought with them a particular challenge. In addition to the fact that I tend to write more horror than anything else, I had originally developed the characters for an audio drama series. Just as with the short stories of 13 BODIES, Speaking Volumes approached me about doing a book series based on these characters. I was excited – and still am – but found that I needed to approach these characters from an entirely different mindset. The audio dramas are fun, action-packed adventures, the characters entertaining and prone to banter. This worked perfectly in the audio dramas, but in a novel these characters needed much more depth, a more three dimensional quality. The reader needs to care for the characters and so Marc and Dana needed to be transformed into people with multi-faceted relationships, flaws, strengths, motivations. They needed to be rounded out in a way that never could have occurred in a 30 minute audio drama. As well, the story lines needed to go through the same process. I’ve brought in subplots that never would have worked in the other format. I’ve added characters, back stories. These books have been challenging and fun.
How do you develop characters, Thom?

To me a story is always about the character. If I don’t, at some level, care about the protagonist than I really don’t care about the story. There can be wonderful plot twists, surprises, reversals, the works, but if it’s all plot with cookie-cutter players I’m not onboard. For my characters, I try to give strengths and weaknesses, goals and beliefs that are at odds with one another. Real people aren’t consistent. Someone who is for the most part a good person might make some horrible choices. A person might make one decision on Monday, but on Tuesday, when faced with the same situation, take another route. I give my characters detailed back stories. Even if the information never makes it into a book, I need to know where this person has come from, what he/she believes, what the person’s goals and ambitions are, what personal demons he/she faces. I never create a character based on a real person, but I do sometimes borrow traits from people I’ve encountered and throw them into a character’s mix. I’ll use speech patterns, mannerisms, style of dress, but never more than one from the same individual, and even these, I usually add a twist to make something fresh. Once I’ve created a character, I place him/her into a situation and try to write the responses based on how I believe this particular individual would react. This will often help to determine the direction of the plot. “What would this person do when confronted with this problem? What if this was revealed to him/her? What would be the reaction?”


As far as plot is concerned, I usually start writing with a vague idea as to where the story is going. I’ll write the first five or six chapters with no outline or thought as to how the story will end. Soon there comes a point where I need to start making real decisions. But, by then, I’ve had a chance to become better acquainted with my characters and with the general flow of the story. At this point I start writing down plot points. They aren’t necessarily in order yet, some of them may not even make it into the story, but I’ll write down every idea I have on 3X5 cards. Eventually, I take the cards and start putting them in order. “Well, this needs to happen before this. Oh! And if this happens, I need to add a scene earlier on that sets it up.” Often one or more of the original chapters is deleted in favor of another that fits the overall movement of the plot and characters. Again, I let my characters lead the way. I try to stay true to how a particular character would react under certain stimuli. And if the person acts contrary to character, there needs to be a reason. These cards become my outline. But, that said, I’m always willing to take an unscheduled turn if I think of something later in the process. In THE DEMON BAQASH, I added a significant event in my final draft, and that event is the one that most people tell me is their favorite scene in the book.
Where can folks learn more about your books and events?
Here are some links where you can find me, my books, and my audio dramas:
THE DEMON BAQASH, available in print as well as eBook formats: http://www.amazon.com/s/ref=nb_sb_noss?url=search-alias%3Daps&field-keywords=the+demon+baqash&x=13&y=19 ) 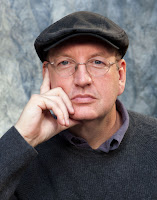 Thanks for dropping by, Thom, and continued success!
Posted by Susan Whitfield at 8:00 AM 4 comments: