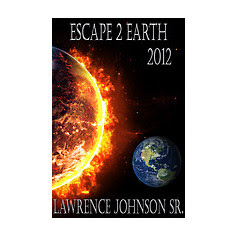 I am delighted to welcome Lawrence Johnson to the blog today. Lawrence, please give us a brief bio, and include something about yourself that readers might be surprised to learn.
I am the co-founder of Book Town, the free social network for authors on the internet. My daughter and I own Global Book Blast, an international book promotion company for authors.
Yes, and I so much appreciate Book Town not only as a "resident" myself, but because of your hospitality, Mayor of Booktown, another great spot to post author interviews.
How many books have you written?

My first full length novel was Escape 2 Earth 2012. Since that time I have written the sequel titled Return 2 Earth and about a dozen or so short stories in the sci-fi, fantasy and mystery realm. I have also written one detective novel so the total number of books written would be three.

Give a short synop of each book.

Escape 2 Earth 2012 is a sci-fi story that centers around space aliens and December 21, 2012. The main characters have a close encounter with members of a clandestine alien organization and must convince world leaders to evacuate earth. The story involves deception, secret alien bases, assassination, sabotage, alien planets, space ships and a lot more. Return 2 Earth is the second book in the series. It takes place seven years later in a far away galaxy. As humans continue to adjust to life on their new planet a cruel, heartless alien dictator has enslaved those left behind on Old Earth. Leaders from Earth 2 join forces with the Planetary Alliance to free those enslaved on old earth but there are many obstacles. A massive rescue force is mounted but the ruthless alien leader has planted a traitor in the midst of the Planetary Alliance. There are twist, turns and many setbacks during the sequel that takes place on several planets including Old and New Earth.

Are they available in print, ebook, and Kindle formats?

Yes, Escape 2 Earth 2012, Return 2 Earth and Blackout are available in paperback and e-books on most book sites. My daughter and I have combined several of our short stories into two books, Paranormal Portals and Anthologies of the Spiral Galaxy which is a spin off from the Escape 2 Earth series. All of these books are also available in the UK.

What has been your most rewarding experience as a writer?

When I decided to write my first novel I wrote it for me. I didn't know how it would be received by the general public but that was secondary to me. When the book was published the response from friends and family was gratifying but I would have to say that the sales of Return 2 Earth Liberation Force (Book 2 from the E2E Universe) was the most rewarding because these were people who enjoyed the first book enough to read the second.

Absolutely, most people that I have talked to at book festivals and signings think that you don't need to research sci-fi since the places are not real. Escape 2 Earth deals with worldwide issues and world leaders as well as distant galaxies. The main characters travel around the world and massive space vessels have to be constructed around the entire planet so locations, world leaders and international cultures had to be researched. Worldwide landmarks like Stonehenge, Christ the Redeemer, and the Sphinx also needed to be researched. Another issue was creating an original galaxy of planets. In the 5 years since the first novel the planets, leaders, ships and aliens have become so detailed, so defined that we have put together a free guide called Lexicon of the Spiral Galaxy.

When writing, how do you determine when enough is enough?

Actually I don't set limits when it comes to writing a story. Most authors, myself included write more than they need then cut out the parts that don't fit or flow on the re-write.

Great answer.
We all know how important promoting our work has become. How do you get the word out both off and online?

Online it's pretty much the same as with most other authors, I have a website, Facebook page, Myspace, and a blog. I also have several book trailers on you tube and belong to a half dozen author social sites. I am a regular guest on the G-Zone radio show and am featured in blog interviews whenever I am offered the opportunity. In my opinion promoting your novels at book-fairs and book signings is more effective than online promotion. There's something special about meeting people face to face. That interaction is even more special when you meet someone who has purchased one of your books in the past. I put together a manual for authors who attend book festivals and fairs; it’s called The Complete Author's Guide to Planning and Attending Book Fairs.

Oh, I've got to check that out.

It's Available on Lulu, iPhone, iPad or iPod touch Barnes and Noble etc. There is an effort to have Escape 2 Earth made into a weekly series. So far we have more than 50 signatures so far. I hope your reader also sign it. http://www.change.org/petitions/escape-2-earth-2012-the-television-series

I wish you the best of luck with this endeavor.

Can you tell us your writing goals for 2012 or beyond?

Wow, okay, I am currently working on the third and final book in the Escape 2 Earth series titled Earth 2 Redemption. In contrast to my sci-fi stories I am about to began another short story in the Alexander Steele short story mystery series. The story is called Death on the Delaware. Sometime during 2012 I will complete the re-write of the detective mystery novel Blackout which takes place in Philadelphia Pa.

Thank you Susan for giving me the opportunity to promote my work.

You're so welcome. My pleasure to promote a man who promotes so many. And for those of you not familiar with the Book Town community, check it out at www.booktown.ning.com 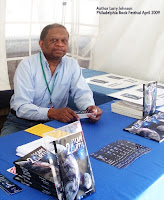 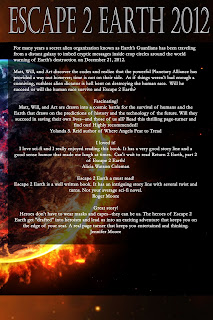 Kindle versions can save you big bucks

Even though my books are in print, they are also available in digital versions for those of you who love to read but balk at paying the price of print. To make it easy for you,  here's the link to Genesis Beach, the first book in the Logan Hunter series. And the price has dropped, which I'm glad to see.

I'd love to know what you readers and followers prefer. Do you only read print? Do you prefer digital so that you can enlarge the print to suit your needs? Do you like the prices? Please feel free to leave comments in the section below. Thanks!