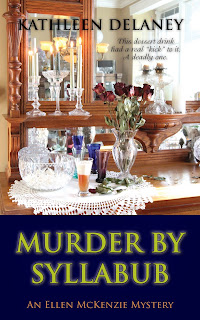 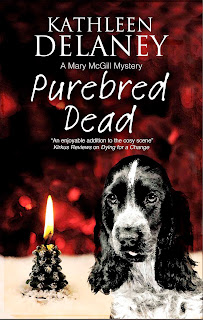 Kathleen Delaney lived most of her life in California, both southern and the central coast. To date, all of her books have been set there and that is where she set her Ellen McKenzie real estate mystery series.
Kathleen has five grown children and eight grandchildren. They kept her quite busy for many years, and were involved in many different activities, including 4H. Her first published article was about their adventures in 4H.


Retired from a long career as a real estate broker, she now resides in Georgia with two dogs and a cranky diabetic cat. She writes, and reads full time.

Kathleen, it's great to see you. It's been a long time since we were together at some events in North Carolina.

It has been, Susan. Can I offer you some syllabub?

Uh, no ... thanks, Kathy. I'll pass on that and right to the interview.
How many books have you written?

I have five books in the Ellen McKenzie series, and the first book in the Mary McGill canine mysteries, Purebred Dead, has just been released in England. It will be available in the US August 1 of this year. The second in that series, Curtains for Miss Plym, is in its final edit stage and will go to Severn House for final approval in June. I guess that makes it 6 ½.

Give us a brief synopsis of most recent book, Purebred Dead:

Mary McGill, retired home economics teacher, is a pillar of the community. A finger in every pie, a seat on every committee, it's Mary you go to if you want something done right. Only, the Christmas Extravaganza is about to start, the Posada is approaching the manger set up on the church lawn, and it’s not empty. A man is dead in it. Two of the town children found him, along with a black and white puppy, and may have seen the murderer.  Mary knows nothing about dogs, but she’s about to learn while she tries to protect the children and solve the murder before the killer strikes again.

It went more smoothly than some, but I needed to find something genetic that would identify a specific dog. I had several long chats with some dog breeders before I came up with the trait I needed. It was fun research, and I learned a lot that’s not in this book. Maybe the next one.

Do you travel to do research or for inspiration?

Yes, and no. The internet has changed the way I think a lot of us do research. I can travel into neighborhoods or through cities, or into bedrooms. I needed to know what a young girl’s bedroom would look like in the ’40’s and almost had too much information. But there is no substitute for being there.  In Murder by Syllabub I traveled to Colonial Williamsburg, interviewed several of the staff, took a notebook full of notes and a lot of pictures. I love Williamsburg, and thought I knew a lot about it. I was wrong. I still have lots to learn and will go back. In And Murder for Dessert I set much of the action in a winery. The central coast has some of the best small wineries anywhere, and I toured many of them. Very pleasant research.

How do you store ideas for later use: in your head, a notebook, or a spreadsheet?

The very idea of a spreadsheet makes me break out in hives. Lots of them roll around in my head, but the ones I want to actually work on go into a notebook.

My future writing goals/projects:
They’re not quite the same thing. My projects are to write several more books in the Mary McGill canine series. I love Mary, she is so down to earth, with a great sense of humor, a great cook, much more organized than I’ll ever be, and she loves her dog. Good qualities, all.

I have ideas for several stand-alone suspense books I want to write, and hope to get to at least one this year. As for a goal…I want to have a book on the NY Times best seller list, even if it’s for only one day.

Where you can learn more about me and the books:
My web site is a great place to start, go to www.kathleendelaney.net. You can read the 1st chapter of each of the books and there is a button that tells where I’ll be, and another if you want to contact me. I love to do events, and don’t worry if you don’t live in the south. I think I know how to work Skype.

That's great, Kathy. I wish you the best of luck with the new book and all the rest. I hope to see you again soon.