My special guest today is Jo Hiestand. Welcome, Jo. Please tell us a little about yourself.

Well, where to start…  I’ve lived most of my life in St. Louis, Missouri, where I was born.  I wanted to be a writer since I was in grade school but I didn’t do anything about it until I was in my fifties – I took a continuing education class through the local community college.  That writing teacher ignited my desire and I started writing in earnest.  My first novel, Death of an Ordinary Guy, was published in August 2004.

Part of the trouble with deciding to write seriously, why it took me so long to get going, is that I have too many interests. It was difficult to narrow it down. I love music – I play 12-string guitar and the harpsichord – so I thought about being a professional folksinger or a concert pianist. Photography, drawing, quilting and baking also take up large parts of my life – could I do something with that? A hobby at one point was writing a script on some topic, like autumn or the day in the life of a pond, then go out and take illustrating photographs, record the narration and plop it all together with music as a multi-media show with the projected slides, recorded narration and music. That was so cool! Could I professionally sell those to school districts for their curriculum? I toyed with the idea of setting up a tearoom, baking cheesecake, creating my own recipes and putting them in a cookbook…. Clearly, I was destined to use all this in my writing, ha ha!

I write two English mystery series: the Taylor & Graham mysteries use a different English custom as the backbone of each book’s plot. In April, there will be eight published books in this series. The McLaren Case Mysteries series saw the light of day last year; it features ex-cop Michael McLaren who now investigates cold cases on his own. The second book, Swan Song, will be published in April 2011. I’m more excited about this release than any of my other books because I will have a book signing at Tutbury Castle, in England – where part of the novel takes place.

A few short stories appear in three L&L Dreamspell mystery anthologies, and some of my articles also have been published in magazines, community newsletters and newspapers.

I lived in England during my stint at professional folk singing. It was then that my love of All Things British was born. I insist for accuracy in my novels  from police methods and location layout to the general “feel” of the area  so I’ve wandered back innumerable times to Derbyshire for research. Through one of these adventures I acquired two friends in the Derbyshire Constabulary. They’ve answered British police procedural questions and read my manuscripts to see that all is well.

As far as classroom education is concerned, I graduated from Webster University with a BA in English and departmental honors. I’m a member of Sisters in Crime (being the founding president of the Greater St. Louis chapter), and Mystery Writers of America.

An awesome biography, for sure, Jo.
Tell us about your latest book. Is it available in print, e-book, and Kindle formats?

I have two books coming out in April this year. A Well Dressed Corpse is book eight in the Taylor & Graham series. Corpse deals with the odd Derbyshire custom of well dressing. The local legend of a shuck (ghostly black dog) and the disappearance of a young woman twenty-three years earlier to the current murder are also part of the story. I tried something new with Corpse, thought; I’ve woven newspaper articles, diary entries and stories from library books throughout the book. These emphasize what’s going on in the story. Hope it’s received well!

Swan Song is the second in my newer series featuring ex-cop Michael McLaren. In this book, a popular folk musician is murdered after singing at a castle’s medieval fair reenactment. Unbeknownst to McLaren, someone he loves tries to help him solve the case and ends up in great danger. So McLaren not only has to solve the case but also rescue his love!

Both books take place in Derbyshire, England and are published by L&L Dreamspell. They will be available in trade paperback, e-book and Kindle formats.

Do you think your writing has improved since your first attempt? If so, in what way?

Without a doubt, yes! I wrote my first novel when I was in high school. I didn’t know a thing about plotting or editing or that certain publishers accept certain genres. It was a terrible book and I still cringe when I think about it. Through reading authors I admire I’ve learned about plot and pacing and characters. I’ve learned how to write in a more compact style and let the reader draw assumptions. I ‘show’ now that I can write descriptively, so I think that brings the reader into the story.

Were any of your books more challenging to write than the others? If so, why?

Horns of a Dilemma was the hardest to write, at least so far. That’s book five of Taylor & Graham. It’s the first book that a friend of mine -- a St. Louis-area police detective -- co-authored with me. Paul had been helping me before this, though, by supplying information and writing fight scenes for me. But with “Horns” we took a chance and he actually wrote some chapters as one of the characters. This was tremendous fun for us both and we continued the co-authorship in the next book, The Coffin Watchers. But it was a bit of a challenge at first to figure out how to write together.

Also, the plot was a bit more complicated than the previous four novels. Horns involved current information about an endangered animal species, so I had to research that. I also had to research a bit about another country and MI-6. It was a fun book to write but it took more time to assemble all the information.

Characters are the heart of my stories. They drive the plot. So, I create a mind map on a piece of paper. I put my victim in the center of the page, with a circle drawn around the person’s name. From there, lines like the spokes of a wheel radiate outward. These are the characters who are connected to the victim, including the killer. They all must have some relationship and I jot down phrases about each person. For example, if the victim is a photographer, the characters could be his wife, a gallery owner, a rival photographer, a magazine that’s used his photos, his brother-in-law, the landlord of his studio, a client… You get the idea. People who are connected to him. From these characters and their personalities I figure out who would have a reason for hating the guy enough to kill him. I think this works better than a plot-driven story because the characters never do anything against their personalities. It’s believable.

Setting is in Derbyshire, England. I tend to use small villages because I like the closed society of a village – they all know each other and someone usually has reason to murder his neighbor! But my books are not cozies – you might refer to them as a cross between a cozy and a police procedural. I think the cozy’s restriction of everyone knowing everyone heightens the tension.

I’ve lived in England and have vacationed there extensively, so I know the region quite well. Since I have the personal experience of the area, I populate it with my stories. Even if I do create fictional villages, I use real towns of Buxton, Ashbourne, Chesterfield, etc and some real places in those towns. So, for the most part, the setting flows from my having been there.

I grew up reading The Three Musketeers, Rebecca, Jane Eyre, Kidnapped. I loved authors such as Walter de la Mare, Daphne du Maurier, and Charles Dickens... Then, in my adult pre-published years, I devoured every book of the Golden Age mysteries of Ngaio Marsh and Josephine Tey. I loved the mood of the writing as well as the locations. Without thinking about it, this atmospheric feel has crept into my writing in the form of my scene descriptions and location choices – dilapidated stone barns, thunderstorm in the forest, midnight on the moors….

I’m a nature lover – trees, the land, birds, wildlife. These elements crop up in my writing as descriptive scene writing and as character traits. Brenna Taylor, the detective-sergeant in my Taylor & Graham series, is a bird watcher and she gets into trouble occasionally while doing a bit of bird watching on a case. So my upbringing has helped create Brenna.

I just finished book three in the McLaren series. In December 2010 I’d gone to Scotland for a quick visit – I got an idea for another McLaren book while there, so I’m plotting that story right now.

Before I write McLaren’s fourth book, though, I’d like to take a break from penning mysteries and write a stand-alone. Something completely different. Something for which I’ll need a pen name. I’ve just got the beginnings of an idea but it’s not quite matured yet.

A 15-minute one-act play of mine won a contest last year and ended up being produced in a local community theater. That was a lot of fun so I recently wrote another short play and am about to submit it for production consideration. Maybe that one will see the spotlights!

My books are listed on their series’ websites: www.McLarenCases.com and www.johiestand.com

Each site has an events calendar that is kept up-to-date.

Jo, it has, indeed, been a pleasure to have you here. Continued success with your writing. I hope your castle signing is a smashing success! Please post pictures from it on Facebook for all to see.

Thank you for offering me a spot on your blog, Susan. This was great fun! 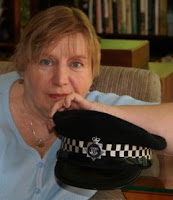 I attended the Cape Fear Crime Festival in Wilmington, North Carolina February 4th and 5th. The orginial Crimefest came to a halt about four years ago and Joyce and Jim Lavene along with Judy Nichols resurrected the event. The Lavenes, Judy, and I are all members of The Carolina Conspiracy, the brainchild of Joyce and Jim. We travel all over the two Carolinas having fun, talking about writing, and signing copies of our books.

It was a pleasure to see so many of the CC members and to meet new folks, both readers and writers. I was especially delighted to meet fellow Dreamspell author, Linda Lovely. She's quite a trip! I appreciate all the work that went into planning and implementing the event, and special thanks to Two Sisters Bookery and New Hanover County Library for their parts. I hoped to see more readers there. That was my only disappointment. I hope we continue to have the Crimefest and spread the word so that more writers and yes, many more mystery readers, will attend next year.

Jim Lavene with me during the social:

Karen McCullough and me:

Linda Lovely, another Dreamspell author, with me at Cape Fear Crime Fest:

Pal, Lynette Hampton, a fellow Carolina Conspirator with me at CFCF:

M.K. Graff with me at social:

A grand time was had by all!
Posted by Susan Whitfield at 2:33 PM 1 comment: