I had the pleasure of meeting author Lissa Brown at the first "High Country Festival of the Book" in Blowing Rock, North Carolina. I invited her over to tell us more about herself and her writing.


Lissa Brown tells folks in her new Appalachian Mountain home in NC that she got there as fast as she could. It only took 62 years to travel from her native via the area. She’s a self-acknowledged seat-of-the-pants writer who retired after successful careers in teaching, marketing and public relations to do what she wants to do—write full time.

A former columnist, media relations consultant for political campaigns, speech writer and anything else that paid the mortgage, she wrote a humorous memoir about her first 18 months in Appalachia and an award-winning YA novel. In between those two projects she contributed several essays to anthologies and volunteered in a local literacy project. She tries to play bluegrass banjo but admits she started about 50 years too late to be able to do it publicly without great embarrassment.
Give a short synopsis of your most recently published book.

Thanks, Susan.
Family Secrets: Three Generations chronicles an extraordinary relationship between a granddaughter and her dead grandmother. With her grandmother as her mentor, young Ellen Brodsky survives the trials of a seriously dysfunctional family and the throes of dawning adolescence. The family maintains several secrets, but the one that provides redemption for three generations of women is kept by Grandma Hannah and revealed in a surprising manner at the end of the book.
How much of yourself is hidden in the characters of the book?
That depends on who you ask. Family members claim to see more of me in the young girl than I believe is there. I’ve used a few incidents from my own life in the book. Because the family contains two parents and two children as mine did, and the setting is very like the place where I grew up in , people have assumed incorrectly that this is a thinly veiled autobiography, which it definitely is not. The girl’s voice sounds like mine in ways that reflect life in a NJ city, but her character does not mimic mine. I’ve given up trying to convince some people that I’m not Ellen Brodsky. Like all readers, they see what they want to in the book.
Do your characters take on a life of their own? If so, which is your favorite?
Definitely. From the first chapter I was amazed how they pushed and pulled me to tell the story the way they wanted me to. It’s the most astonishing experience I’ve had in my writing life.
I’m partial to Grandma Hannah, a warm, wise woman who lived from 1890-1930 and is constantly baffled by the 1940s and 1950s when her granddaughter was growing up. I love her sense of humor and the unconditional love and wisdom she offers Ellen.
What challenges did you face while writing this book?
This was my first work of fiction. Since I’d only written non-fiction, it was difficult at first to let my imagination run free. I’d always been fact-based and cut my teeth on journalistic writing and I had a tough time believing it was okay to make things up. I’ve confessed to fellow fiction writers that I was dead wrong when I used to believe writing fiction was easy. It was the most difficult writing I’ve ever done and I felt completely inadequate until I received some great affirmation from other writers whose work I admire.
What do you think is the greatest lesson you’ve learned about writing so far? Any advice for others?
I had a lot to learn about writing a novel and still do. I had to learn to trust myself to follow my characters and relinquish control of the story until I saw where they wanted to take me. I didn’t always give in, but I learned to compromise with them. Usually, they were right. There are so many rules about writing that trying to follow them all can be paralyzing. I’ve learned there is not going to be such a thing as perfection in my eyes or the eyes of readers.
My advice to others is to learn the rules and then figure out which ones you choose to break to get the result that pleases you. Get critiques from as many other writers as you can. They walk in your shoes and often see things you don’t.
ll us your goals for 2012 and beyond.
I’m finishing a second novel about a gay boy who is bullied by his father and others. I hope to publish it by the end of the year or at the beginning of 2013. I’m also working on a third novel that is entirely different from the first two, aimed at an adult market and exploring characters who focus on body images to the possible exclusion of deeper characteristics of people. When I need a break, I play with a series of humorous vignettes that I might compile into another humorous work reflecting what we really did as kids that we might not want children and grandchildren to know about while they’re young. I hope to develop a blog in the next six months if I can cope with the technology.
Where can folks learn more about your writing?
By the grace of divine intervention, I managed to develop a website, www.lissabrownwrites.com, and hope visitors will tell me if I’ve mastered the art of southern hospitality. Y’all come.

A unique recipe book, for sure!


I started interviewing a multitude of writers and other industry experts. For several months I was inundated with appreciative authors, and I absolutely loved doing it. I still interview authors but not 30 in thirty days as I did then. I also wanted to continue to find ways to promote other writers as much as they promote me. You know, scratch my back and I’ll scratch yours. 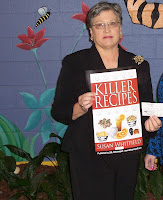 That’s the rationale behind the cookbook, KILLER RECIPES. I have a friend who writes cookbooks with a twist—something I never expected to do. However, the idea to compile recipes from mystery writers across the country and give them some free promotion would not go away, so I asked other writers if they’d submit recipes for a cookbook with proceeds going to cancer research, not into my own personal pocket. Over sixty writers signed up.


Many writers who submitted recipes were either cancer survivors or have been profoundly touched by this horrible disease. I only wish I’d had enough room to tell each one’s story as well. My grandson, Caleb, was diagnosed with leukemia when he was only two-years-old. I am thrilled to say that Caleb is now 12-years-old and cancer-free, thanks to research and a team of incredible doctors. I dedicated this cookbook to him and all other victims of cancer. It is not, however, a low-fat cookbook, and even though the title sounds ominous, we’re just having a little fun. We renamed recipes to fit the murder mystery theme. For example my peanut brittle recipe is now “Brittle Bones”.


The purpose of KILLER RECIPES is to raise money for research and simultaneously give writers a little free promotion. Under each recipe I listed the contributing author, book titles, and web sites. We plan to sell these books wherever we do signings—fairs, festivals, Relay For Life events, wineries, you name it. Some folks are collaborating on signings in their part of the country and asking local book and gift shops to carry a few copies. Someone came up with the idea of serving a couple of recipes at signings. I haven’t done that yet, but I plan on it. Many are blogging and promoting it online and everywhere they can. Kudos to L&L Dreamspell for offering to publish the book and donating their percentage of sales to the cause.


The book is available online in print and at your favorite local stores. If they don’t have it in stock, they can order it for you. It’s also in ebook and Kindle format.  We’re hoping folks will buy plenty of copies of Killer Recipes to give as gifts and join our efforts to eradicate cancer.

By the way, don’t forget to check out my other books at www.susanwhitfieldonline or look me up on Facebook: www.facebook.com/susanwhitfield
Posted by Susan Whitfield at 9:54 AM No comments: