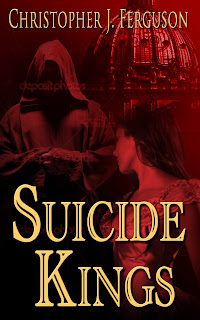 Christopher J. Ferguson is an associate professor of psychology at Stetson University where he studies violent behavior and the effects of media violence.  His research has generally questioned whether media such as video game violence contributes meaningfully to societal violence and his work has been cited by the US Supreme Court.  He lives in Winter Springs, Florida with his wife and son.

I love to travel and have often been inspired by places I’ve been.  Suicide Kings came about due to a trip to Florence.  I had gone there for an academic conference and went myself for that trip without my wife and son.  Homesickness set in pretty quick and I found myself unusually despondent despite basically being on vacation.  Florence as a city is both very beautiful and very imposing, still having many tall Renaissance buildings that loom over you and cut out a view of the horizon.  I remember thinking to myself, “This would be an excellent city to die in.” And thus was Suicide Kings born.  I wrote what would become chapters 2 and 3 there in Florence or in the airports on the way home.

As a young woman in Florence, Diana Savrano’s life is a privileged one of elegant balls, handsome suitors and frivolity.  But the sudden death of her mother leaves her adrift and abandoned.  As she sobs over her mother's casket, another member of the procession reveals the awful truth: that before her last days, Diana's mother had joined a Luciferian cult.  Despite knowing little beyond her pampered world, Diana determines to unmask those responsible for her mother’s death.  But someone does not want such secrets revealed, and they are willing to send assassins to keep her silent.  Paranoia and loneliness set in as even her closest friends reveal hidden agendas.  Worst of all, the further she follows the intertwined threads, the closer they appear to lead to her own father.

That’s a particularly interesting question since the lead characters are mainly female!  I’ll let readers psychoanalyze me if they wish!  But I think, of course, as writers, some of ourselves ends up in characters, particularly characters we identify with.  And for a character like Diana Savrano, I drew as well from the strong women in my life, particularly my wife and my mother.  That’s one element of myself as well that was crucial to this book, and a lot of my writing really: I am most interested in strong women characters.  I’ve written some stories with male leads but, overall, don’t find them to be quite as interesting.  And I think there is a need for more books (and movies and television shows) with strong women (and girl) characters.

The biggest challenges for me are time and energy.  I have a full-time “day job” and a family that likes attention, so with that, finding a few hours here or there to write can be tricky.  And I’ll be honest, that time also competes with things like compelling television!  Given the enormous amount of hours that go into writing a book, maintaining some degree of diligence to get it done is always the tricky part.  It’s easy to come up with a great idea, harder to write it down!

Persistence, I’d say, is the greatest virtue of the writers, whether writing fiction, non-fiction or academic publishing, it’s all the same.  Rejection is our lot in life, and being able to persist and believe in what we’re doing in the face of that rejection.  That may sound bleak, but it’s the way of things.  People who are able to persevere, to improve their craft, to remain sure of what they’re doing in the face of early rejection will be the ones to ultimately succeed.  If you let fear of rejection stop you, it will be impossible to advance in any kind of career in writing.

It’s all in my head!  I’ve tried other approaches before, particularly notes and outlines, but ultimately I prefer to let things be a bit more free-form.  I think that helps stories to develop a bit more organically.  Very often the way a story comes out is quite different from what I’d originally envisioned. 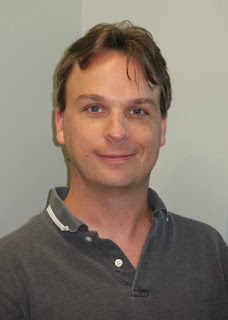