Posted by Susan Whitfield at 1:08 PM No comments:

No Substitute for Money!

Carolyn J. Rose is the author of several novels, including Hemlock Lake, Through a Yellow Wood, An Uncertain Refuge, Sea of Regret, A Place of Forgetting, No Substitute for Murder and No Substitute for Money. She penned a young-adult fantasy, Drum Warrior, with her husband, Mike Nettleton.

She grew up in New York's Catskill Mountains, graduated from the University of Arizona, logged two years in Arkansas with Volunteers in Service to America, and spent 25 years as a television news researcher, writer, producer, and assignment editor in Arkansas, New Mexico, Oregon, and Washington. She founded the Vancouver Writers' Mixers and is an active supporter of her local bookstore, Cover to Cover. Her interests are reading, gardening, and not cooking.

I’ve lived in Vancouver, Washington for the past 13 years. The area reminds me a lot of the Catskill Mountains where I grew up. At least the low mountains do—the Catskills don’t have towering volcanic peaks or the rounded domes of dozing volcanoes like Mount St. Helens which I can see from my bedroom window when the leaves are off the trees. Growing up in the mountains in the 1950s imprinted the “small-town experience” on me and I’ve drawn on that in writing Hemlock Lake, Through a Yellow Wood, and A Place of Forgetting. Living and working in the growing city of Vancouver and subbing in high school here definitely influenced my cozies, No Substitute for Murder and No Substitute for Money.

15. Many are now out of print. Some will soon be revised and re-released.

Substitute teacher Barbara Reed knows better than to say the word “perfect.” Using the P-word is a sure way to jinx romance, finance, and circumstance.

Despite a chronic shortage of funds, things are looking up for Barb after the events of NO SUBSTITUTE FOR MURDER. She’s completing grad school and hoping for a job at Captain Meriwether High School in Reckless River, Washington. Her drug-cop boyfriend, Dave Martin, wants to move in and his daughter is all in favor. Even Barb’s tiny dog Cheese Puff has no objections—undaunted by size, he’s infatuated with Dave’s partner Lola, a drug-sniffing Golden Retriever.

Then Dave uses the P-word. And Barb’s luck leaves town.

Her car breaks down, her domineering sister comes for a visit, the condo manager plots to ban dogs, her jailed ex-husband begs her to be a character witness at his trial, a computer hacker creates chaos at the high school, and a hulking thug threatens violence.

Just when it appears things can’t get worse, Lola sniffs out a package in her car and a drug dealer decides Barb and Cheese Puff are his tickets out of trouble. 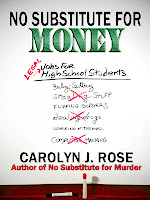 They do. Often I wake up at night having dreamed about them and what they “intend to do” in the next few chapters. Characters in Through a Yellow Wood told me they were getting sick and tired of a couple of difficult characters. They assured me they knew I put those folks there to create conflict, but they felt it was time I found other ways to stir things up in the community of Hemlock Lake. I took their advice and killed one character off and arranged for the other to leave town.

Most of my travel now is through recollection of places I’ve been in the past—the Catskill Mountains and the Oregon Coast. I’m always inspired when I return to the place I grew and walk those overgrown paths into the woods. And I’m always moved by the crash and thrash of the Pacific Ocean which is just a two-hour drive from where I live now.

Not every book is for every reader. Make up your mind before your book is published that you’ll get some one-star and two-star reviews no matter how engaging your characters are or how tight and original the plotting may be. Get mad about that, kick some furniture, punch out a pillow, then face up to reality and get back to writing. Write to tell stories and give your characters life. Write because that’s what you want to do more than anything else. Later, go back to those reviews and read them carefully to see if they contain anything that can help you hone your craft. You might be surprised.

Without my pack of index cards and the calendars I use to keep track of plot progression, I’d still be working on my first novel.

I’m terrible at this. I blog and participate in some groups. I should do a bunch more but I keep breaking the promises I make to myself to do that. The messages I received as a child were, “Don’t talk about yourself, don’t be pushy, let others go first.” With that baggage, it’s hard to promote myself.

Those Hemlock Lake characters want me to write a third book and I intend to start on that project this summer. But I may have to write a third substitute book first. We’ll see what happens when I clean up my office and get settled at the computer.

Most of them are available in both formats.
Posted by Susan Whitfield at 8:00 AM 7 comments: