Sheila Boneham invited me to guest blog on her new site, www.sheilaboneham.blogspot.com:

Today I'd like to welcome North Carolina author Susan Whitfield, author of the Logan Hunter Mysteries, who talks about her books and the beautiful state in which they are set. If you leave a comment or ask Susan a question, your name will be entered for a free copy of Genesis Beach!

Let me begin by saying how much I appreciate Sheila Boneham inviting me to guest on her blog. I met her last year at Cape Fear Crime Festival in Wilmington and we were on a panel about book promotion. We found that we’re kindred spirits in several ways: both writers, lovers of books and animals, and residents of eastern North Carolina. Thanks again, Sheila, for the friendship and support.


I wrote the bones of my first mystery, Genesis Beach, while I was still a high school principal, occasionally pulling out a legal pad when I had hours between the end of the school day and a meeting or ball game. 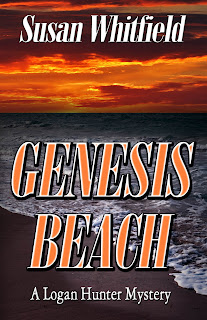 Genesis Beach was my first attempt at writing, and I am here to tell you it was quite an eye-opener for me. I’d taught English for thirteen years on the high school level, making certain that students used correct grammar, spelling, and punctuation at all times. I found that trying to write a novel that way made my characters boring and the entire plot stilted and unbelievable. So I grabbed up my many pages and trashed them. It hurt.


After a couple of soul-searching days of carrying ideas around in my head, I started over. The experience was surreal. Logan Hunter, my female protagonist, took over and words, phrases, and attitudes poured down my arm, into my fingers, and appeared on the monitor. I wrote in a frenzied state for hours and left the computer an exhausted but thrilled emerging writer. I hope every writer out there has that kind of experience.
Genesis Beach is about a young lady who decides to major in Criminal Justice and then applies for the SBI, our equivalent to the feds. Part of her program requires an internship, which she completes at Genesis Beach, where her mother lived until she had a stroke. Logan moves into the old place, the beach right out her back door. Her first three weeks at the police station are boring, but when a local millionaire playboy is found dead in his hot tub, the chief of police and his two officers, Max Cash and Logan Hunter, investigate. Even though the man has no visible marks on him, Logan’s gut tells her he had help dying. Over the course of book, Logan uses her newly acquired knowledge to search for a killer once the ME discovers internal bleeding from trauma caused the death. She eventually catches the killer, of course and by the end of the book I wanted to write more about Logan Hunter.


Since I’d set the novel along the Crystal Coast in a fictitious beach town, I decided to take her to the mountains for the second book.Just North of Luck is set in Madison and Buncombe counties in western North Carolina. I upped the ante by having Logan, now a full-fledged SBI agent, chase a serial killer. I upped the ante for myself as well, beginning the book from the villain’s point of view and hoping that readers would have a few sympathetic feelings about him before being thoroughly creeped out later in the book. This book, in my opinion, is by far the most graphically violent. Some of my friends and family started looking at me in strange ways. My husband started telling folks he sleeps with one eye open. 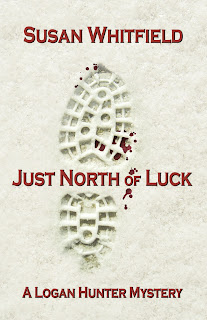 Wow! What an experience. While I was writing this book and developing violent scenes, the villain lived inside my head. I must admit this was a scary time. There were many nights that I didn’t sleep. I was so relieved when I finished the book and he disappeared.
By this time, I was even more willing to write another Logan Hunter mystery and hopefully tone it down a bit. I set Hell Swamp back in my native Pender County about four miles from my childhood home. This mystery begins with Logan miffed at having to return to work even though she’d taken off a few days to plan her wedding to Chase Railey, another law enforcement officer. With some kind of major virus circulating through the SBI, she begrudgingly reports to The Black River Plantation to find the crime scene terribly compromised…an agent’s worst nightmare. 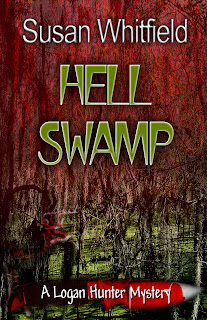 When she pushes through the crowd and into the front foyer, her eyes bulge at the carcass of a small woman, gutted like a deer, and hung from the chandelier.


Deer hunters are the prime suspects in Hell Swamp but they’re closing the circle and trying to protect their own. Logan won’t be getting any time off any time soon. Her fiancé, Chase Railey, comes in to help her solve the case, but due to a misunderstanding, Logan doesn’t want him there. The conflict is evident between them, Logan making Chase as uncomfortable as she possibly can, However, Chase continues to work the case and keep an eye on her.
I enjoyed writing this book because it brought back so many childhood memories—great ones—and also provided me with an opportunity to write conflict between two people who love each other. Trust became a major issue for them to work through. By the end of the book—quite a shock to most readers—they have made up, adopted a victim’s dog, and locked up the perps. Chase gives Logan his mother’s wedding ring a few days before Christmas.
Sin Creek is the fourth Logan Hunter mystery, set in Wilmington because I absolutely love that place. I lived there for a year but cruised the streets all through my high school years. I set most of the novel down by the Cape Fear River, where the Riverwalk connects The Cotton Exchange to boutiques, restaurants, and Chandler’s Wharf. In this novel, Logan is called to a gruesome scene where a college freshman has been murdered. As she begins her investigation, she’s pulled into the porn industry when she discovers the young girl had sex on film in order to pay tuition and have an exciting and titillating nightlife. 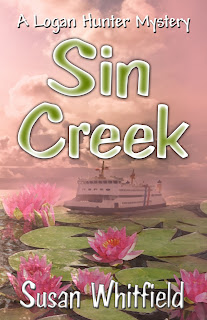 There are several messages in this book, beginning with my letter to readers at the front. My discomfort in writing such a book comes through, I’m told. It was difficult to write, for sure, but I hope parents with children heading to college will read it, not to scare them but to inform them that there are many slime balls out there just hoping to hook up with the naiive. This book was even more difficult because I killed off a character I dearly loved. I cried over the pages many times while I worked to get it just right. Another message in this book is about becoming an organ donor. I hope it makes the reader at least think about recycling in the truest sense of the word.
I’ve written a few pages in the next Logan Hunter mystery, but it will be 2013 before I can say much about that one. It will be set here in North Carolina, probably on the Inner Banks (IOX) somewhere. I have lots of research to do. I enjoyed writing women’s fiction and hope to write more of that as well. I’m also researching an ancestor in hopes of writing an historical fiction.


Sheila, thank you again for showcasing my writing on your new blog. I hope to see you soon. 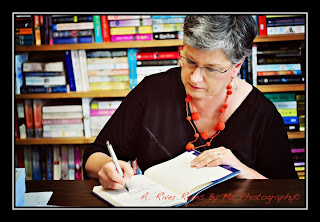 
She has also compiled recipes from mystery writers across the country for Killer Recipes. Proceeds from the cookbook are donated to cancer research I honor of her grandson, a cancer thriver. Susan is an avid blogger and promotes and interviews other authors on her site. Susan is letting her first women’s fiction, The Goose Parade of Old Dickeywood, “cure” for a few weeks before her last edit/rewrite. Then she plans to begin the query process.


For more information, visit Susan’s website at www.susanwhitfieldonline.com where you can view video trailers and keep up with events. Susan is currently interviewing authors at www.susanwhitfield.blogspot.com . She is a member of Mystery Writers of American, Sisters in Crime, Carolina Conspiracy, North Carolina

Sheila lives in Wilmington and writes mysteries about animals.
Posted by Susan Whitfield at 11:10 AM No comments: