Caroline Taylor: What Are Friends For? 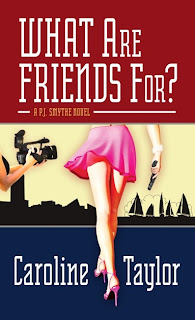 Caroline Taylor's Debut Mystery Tackles the Question: What Are Friends For?

Press Release:
Pittsboro, NC – Award-winning author Caroline Taylor announces the release of her first P.J. Smythe mystery, What Are Friends For? (ISBN 978-1-59414-956-6), a Gale-Cengage Learning publication. An exciting detective tale, What Are Friends For? features P.J. Smythe, an Annapolis "skip tracer," who tracks down loan defaulters. Talked into posing as a novice private investigator by her wealthy friend, Alicia Todd, P.J. is forced into assuming the role of a real detective when her first client, environmentalist Vivian Remington, dies from a suspicious drug overdose. P.J. must dodge a murder charge and wend her way through the treacherous realms of Washington politics and the illegal wildlife trade while attempting to solve the mystery of Remington's death.

Written with classic, hard-boiled "whodunit" panache by Taylor, this first P.J. Smythe adventure is a must-read for mystery lovers who crave masterful character development, outstanding story lines, compelling drama, and a smattering of humorous observations from the heroine. Suspenseful and quickly-paced, What Are Friends For introduces readers to P.J. Smythe, a young, single Washingtonian, who manages to be engaging and likable, as well as gutsy and tough. Although spirited and intelligent, P.J. is also deliciously human, and she struggles to fend off the advances of her ex-husband, Bobby Crane – as well as those of the intelligent and suave attorney, Neal Patterson – while solving her first murder case. As the web of drug-fueled political intrigue tightens and P. J. gets closer to solving her case, her own life is suddenly at risk, making What Are Friends For? the kind of thrilling and ultimately satisfying read that mystery lovers demand.

Formerly from Washington, D.C., Caroline Taylor is an award-winning writer and editor living in Pittsboro, North Carolina. Her short stories have appeared in The Chick Lit Review, Della Donna Magazine, The First Line, A Fly in Amber, Futures Mysterious Anthology Magazine, The Green Silk Journal, Long Story Short, The Oddville Press, Orchard Press Mysteries, The Dan River Anthology-2009, and Workers Write! Tales from the Capitol. She is the author of Publishing the Nonprofit Annual Report: Tips, Traps, and Tricks of the Trade (Jossey-Bass, 2001) and has written extensively for Humanities Magazine and the Smithsonian Torch.

Welcome to the blog, Caroline. It's always a pleasure to interview fellow North Carolina writers.
I’d be fascinated to know more about you.


Thank you, Susan. I got off to a pretty rocky start in life. As a child, I moved from place to place, my parents often were unable to pay bills, and I was forced to drop out of high school. But I managed to pull myself together enough to finish my education—even get a master’s degree—and pursue a successful editing and writing career in Washington.

My first book, Publishing the Nonprofit Report: Tips, Traps, and Tricks of the Trade (Jossey-Bass 2001) was easy. I’d been writing and editing nonprofit annual reports for 20 years by the time I decided I had to prove to my then boss that I was more than “a process manager.” The book won the APEX Grand Award for Excellence in Writing in 2002. My first novel, What Are Friends For?, was much harder to write—but also much more fun.

Congratulations on both.What books or authors have influenced you, Caroline?

Okay. Let's back up a second and talk about the first book. Tell us about What Are Friends For? Is it available in print, ebook, and Kindle formats?

What Are Friends For? is a fast-paced, light hearted spoof of the classic hard-boiled whodunit that explores the lengths to which Annapolis skip tracer P.J. Smythe must go to dodge a murder charge, including dipping a reluctant toe into the Washington political scene and looking into the seamy side of the illegal trade in wildlife—all while fending off the attentions of her former husband and a really desperate ex-boyfriend. I hope enough fans will persuade amazon.com to offer it in Kindle.

I wanted my lead character to have a name that could belong either to a man or a woman, so I settled for P.J. and then decided the initials had to stand for two ridiculous names. To find out what they are, read the book.

Okay. My imgination is spinning out of control. LOL.
Do you have specific techniques you use to develop the plot and stay on track?

I’m afraid I’m a bit like Anne Tyler, who has written that she does not plot but just lets her stories unfold. I have tried plotting, but it’s almost like putting myself in a straitjacket. It takes the fun out of creating vivid characters and then seeing where their needs and desires take them.


At the time I wrote What Are Friends For?, I had been living in Washington, D.C., for years. I did not want to write the typical “Washington novel” with characters at “the highest levels of government.” Not many—if any—mysteries are set in Annapolis, which is small, beautiful, somewhat off the beaten (East Coast) path, and yet still in the neighborhood, as it were.

Through my website, http://www.carolinestories.com/, my author’s profile on amazon.com, and, most importantly, my publicist Paula Margulies, without whose efforts on my behalf no one would know about this book.

Tell us more about Who's Laughing Now?

Caroline, it has been a pleasure to discover you. I extend my best wishes for your writing success!
Same to you, Susan.