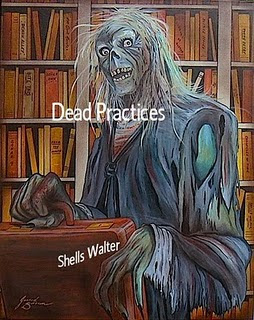 Congratulations to Shells Walter and artist Jerrod Brown for winning The Whitfield Book Cover Award. Anne Patrick's Fire and Ash came in close behind. Throughout the contest period, these two books sparred for first place. The two books are tremendously different in appearance, but both were attention-getters, to say the least.

Shells will receive The Whitfield Book Cover Award decal to use as she chooses, along with a copy of my latest mystery, Sin Creek, when it releases in a few weeks.

Thank you, bloggers and visitors, for voting.
Posted by Susan Whitfield at 8:31 AM 4 comments:

Peter Abresch if back to discuss logic in our writing.

In any discussion of writing or story telling, it's important to talk about logic because once we lose credibility with our readers, we've lost them. Yes, they may continue to the end of the book, but will they journey with us again?

So what do we mean when we talk about story logic? Rob Pegoraro in reviewing a mystery in Book World, complained about the ending of a book had the "the most annoying of cliches, The Girl Too Scared to Pull the Trigger." All cliches rob our writing of spontaneity, but many times of believability as well. I'm betting that because we've all read about bad things happening to the girl who doesn't pull the trigger, a real-life modern woman will blast the ass of a guy hell-bent on doing her harm.

Last time, we mentioned anything can be made logical if it is properly setup. Suppose in that first example, we had setup early in the book that the woman had accidently shot her father and it preys upon her throughout the book? Now we've set up a logical condition whereby she might not pull the trigger. We could also have set her up as a Quaker and once again we have a logical condition.

Want to have an off-world gargoyle killer? Give us some hints of paranormal events. Want our hero to save the damsel in distress at the last moment? Setup a logical reason for him to be there. But not a miraculous coincidence. In order for fiction to ring true, coincidences must always work against our hero, and then damn few.

So you may then ask, how can we have a surprise ending? It, too, must be logical within the story's conditions. A satisfying surprise has it's seeds sown so skillfully that only after the trap is sprung can the reader go back and pick them out. A good mystery has the same construction. Our readers must be able to either glory in the fact they figured out the killer, or be able to go back and pick out the clues they missed. Remember I asked you in Setups and Payoffs to watch the movie Medicine Man to see how setups are done well? If you want to see how Setups and Payoffs work with a surprise ending, watch Sixth Sense. If you get the video tape, go through the movie twice, trying to pick out the clues yourself before you go to the editor's cut explanation at the end.

All fiction crosses a line where the reader has to be willing to suspend belief. Who really thinks Ms. Marple comes upon a new murder every week? Or Jim Dandy and Dodee Swisher find one every time they go on an Elderhostel? But once these opening conditions are accepted, everything else had better ring true if we want to maintain our credibility and keep our readers.

Sometimes we get so close to our work we don't see the obvious. In an otherwise good book, Dead Eyes by Stuart Woods, a police detective is searching for a stalker who has recently moved, but when he thinks he has found the stalker's new house, he never asks the neighbors if the man had recently moved in. He ignored standard police procedures because he either didn't see the obvious, or because it would have screwed up his plot.

Logic must never be bent to satisfy plot. Plot must always be bent to follow real-world logic. In our last example, a house in the boonies would have eliminated neighbors. If we need to create an illogical situation, than we need to setup a logical reason why the illogical situation came about. Again in the above example, if a big community block party was going on, perhaps the neighbors wouldn't be home. Stretching, but logical. Seeing four moons in the sky immediately alerts us to the fact that off-world logic must apply, but then we must establish and maintain that off-world logic throughout the story. Deviate from the off-world logic we setup, just because it's science fiction, and the story will suffer.

Fiction writing is not a series of isolated functions. Setups and payoffs are woven into dialogue which is woven into show-not-tell and POV and plot and characterization and effective writing, but for it to be believable, the whole structure must rest on a bedrock of logic. Our readers already know the story is fiction. If we make it implausible as well, the whole make-believe world crumbles like sand castles before the sea.
Posted by Susan Whitfield at 8:21 AM No comments: