Christopher J. Ferguson is an associate professor of forensic psychology at Texas A&M International University.  His interests in the criminal mind do much to inform his writing, which typically explores the dark side of human nature.  He has researched the effects of media on human behavior and his scholarly work has explored how society reacts, often irrationally, to new media.  He lives in Laredo, Texas with his wife and son.

Welcome to the blog, Christopher.


Well, unintentionally a trip to Florence (Firenze) was the inspiration for this book.  I’d gone to Florence, by myself, for an academic conference.  I went by myself, and ended up feeling very homesick, missing my family.  Florence is a very beautiful city, but also a very dark and foreboding one.  Many of the buildings downtown are hundreds of years old and tend to be tall and looming, such that it’s easy to feel trapped.  In that environment and in the mood I found myself in I began to think, “This would be the perfect city to be murdered in…”

LOL. Give a short synop of Suicide Kings.


As a young woman in Florence, Diana Savrano’s life is a privileged one of elegant balls, handsome suitors and frivolity.  But the sudden death of her mother leaves her adrift and abandoned.  As she sobs over her mother's casket, another member of the procession reveals the awful truth: that before her last days, Diana's mother had joined a Luciferian cult.  Despite knowing little beyond her pampered world, Diana determines to unmask those responsible for her mother’s death.  But someone does not want such secrets revealed, and they are willing to send assassins to keep her silent.  Paranoia and loneliness set in as even her closest friends reveal hidden agendas.  Worst of all, the further she follows the intertwined threads, the closer they appear to lead to her own father.


How much of yourself is hidden in the characters in the book?


Haha, that’s an excellent question.  I most enjoy writing about women, which perhaps says something about me as a man.  I think, though, that I tend to put into women characters, both good and evil, facets of women I find most fascinating.  But there are probably some elements of my personality in there.  And of course my wife as well.  The lead character in Suicide Kings, Diana, is named after her.


Do your characters take on a life of their own? If so, which is your favorite?

Absolutely.  I think entire books do, let alone characters.  After a bit of initial nudging and prodding, characters do begin to breathe all their own, the things they would do or not do in varying circumstances almost written by themselves.  But books are organic as well.  I usually start a book with a pretty good idea of where it will go, although most books will challenge that, head off in directions I never expected.  It’s good to keep your options open, to let the story develop naturally.


What challenges did you face while writing this book?


The biggest challenge is simply finding the time, or perhaps better put, moments in which I have both time and energy.  I have a “day job” and a family, and so it can be tricky to find times to write.  I do a lot of writing at night, when everyone else is asleep.  Taking a quick nap when I get home from work helps me keep up some energy.


What do you think is the greatest lesson you’ve learned about writing so far? What advice can you give new writers?


Persistence.  This is a tough biz.  Honing your craft, thinking up good stories, these are certainly a part of it.  But you’re still going to get rejected.  Learn not to be crushed by it and keep going.  A number of famous authors had to persist through years of rejection.


Can you tell us your future writing goals/projects?


I’m working on something now set in the Greek Dark Ages about a teenage girl who is ripped from her home and made into a slave soldier for a dark empire.  It’s a story about one girl against an entire world, learning to cope with very little resources and get vengeance on those who killed her family. 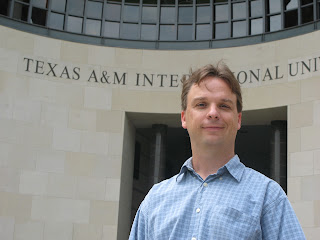 
You can come to my web-site at ChristopherJFerguson.com


Are your books available in print and ebook formats?


They are available in both from Amazon.com or Barnes and Noble.