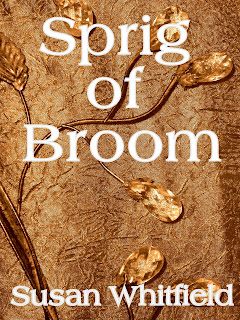 I am a lineal descendant of a Knight of the Bath, Sir Geoffrey V Plantagenet. I read nearly forty books before I wrote Sprig of Broom, wanting to know as much about the man as possible. He married King Henry's daughter, Matilda, and fathered the long line of Plantagenet kings of England.

I hope I pulled it off. The novel has been released in all formats. If you are inclined to read it, please leave a review. Reviews are appreciated even if short. Please "like" it on my Facebook page  www.facebook.com/susan.whitfield and also on my author page there:

Please leave a comment for a chance to win a free signed copy of Sprig of Broom!

Here's a short excerpt to whet your appetite:

An ominous sound unexpectedly penetrated my thoughts and a cold fog washed over me like damp wool. My view disappeared as mist eddied and locked me in its cocoon of eerie dankness, alone. I reached for my blade to cut through it, hoping to open it up like a boar hog’s hide and step out into the light. No opening presented itself. I stopped in my tracks on the rocky road. I knew steep ravines were poised on each side, waiting to beat me to a pulp as I plummeted to the bottom. I could see nothing, but an unworldly and putrid smell invaded my nostrils.
“Blou? Hardouin? Paieri?”
I heard no response from my men, but a low moan grew louder. Did I hear sinister laughter? Could that be possible out here far between two kingdoms? Surely no other fools ventured out at dawn’s first light without due cause.
“Jacquelin? Is that your laughter I hear?”
Jacquelin did not respond.
There! Again I heard it. Menacing laughter. I grabbed the hilt of my dagger with determination as an ominous humming sound came closer to me. Could someone . . . or something see me through the fog? I began to shake from dampness or fear of what brought the laughter.
The cackling turned into a low groan and a hag chewing a brown plant appeared just out of my reach, wearing tattered clothes and displaying ragged and rotten teeth, ghastly wild hair, a prunish face, and foul stench.
“Listen and heed,” it warned.
More shrill laughter and another voice came from a different direction. I turned in a circle and tried to determine from which way the voice came.
“Mesh becomes chain,” a squeaky voice proclaimed behind me.
I blinked, understanding nought. I spun until my lightheadedness dropped me to my knees at the sound of yet another voice.
“Dark of moon brings realm of gloom,” a deeper raspier voice disclosed.
“Heat of broom becomes his doom,” yet another voice declared. I was surrounded.
“Gloom and doom for man of broom!” This deafening pronouncement came in unison from all the ghastly voices encircling me, making my bones creak.
“Who are you? Show yourselves, old crones,” I bellowed, trying not to display fear. But I heard no answer and the fog and the one apparition I could see dissipated. I again had a clear view of the next village, no being of any kind in sight. Where were the barons who had accompanied me from my home land and walked with me only seconds ago?
I turned when I heard a commotion behind me and saw the men running to catch me, Blou in the lead, sword drawn.
“Where did you go, my lord?”
“I have the same question for you, Blou.”
“We walked along the road with you until you disappeared into a fog. We nought could find you or hear you. We called out but no answer came.”
“You did not hear me call to you?”
“No, my lord.”
“Witches surrounded me and separated me from you,” I explained.
“For what purpose, my lord?”
“I have no answer, Blou, only riddles that made no sense.”

Sprig of Broom, by Susan Whitfield, gives us a unique peek into the fertile mind of this award-winning author. While researching her genealogy she recognizes the life of the man from whom she descends, one gallant Sir Geoffrey V. Plantagenet, could be turned into a slightly fictionalized but also true accounting of his long and beleaguered life, its heartaches and satisfactions. Sir Geoffrey was the original Plantagenet who started the Sprig of Broom usage.
Whitfield’s ability to establish unique character personalities is well honed. The settings as described made me feel a part of the story, the action. I fought beside Sir Geoffrey in long and bloody battles, cringed at his wife's cruel taunting and treatment. I despised yet understood the Dowager Empress Matilda. So many diverse lives fill this story and make it an exciting and satisfying read. I am still amazed at how much history is packed in here.
Sprig of Broom is an historical novel that I didn’t wish to see end. But it had to because all of Sir Geoffrey’s life, from teen years and on is included in this exciting portrayal of life circa. 1127 in Great Britain. I don’t want to say much more about this book that wouldn’t end up being a spoiler. So, suffice it to say, I wholeheartedly recommend Whitfield’s Sprig of Broom to historical aficionados, for both the fiction and nonfiction of it. It’s difficult to tell what’s fiction and what’s not. Sir Geoffrey’s life makes it a most exciting read for any reader. Whitfield has paid a magnificent tribute to her ancestor.

Why, thank you so much, Mary Deal! 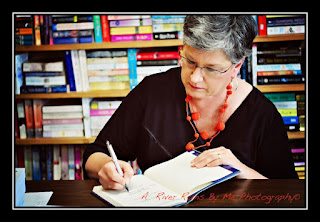 Posted by Susan Whitfield at 10:30 AM