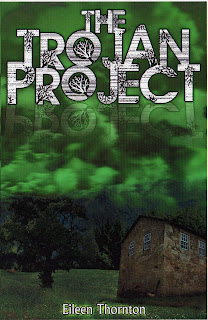 Eileen Thornton has been writing short stories and articles for magazines since 2001. Two of her stories have appeared in anthologies. Her debut novel, The Trojan Project, an action thriller, was published in May 2008.

She is a member of several writing organisations, including The Society of Authors. She also has a Website where a selection of her published work is displayed http://www.eileenthornton.co.uk/

Eileen, welcome.When did the writing bug bite?
I started writing in 2001 when I began a correspondence course with The Writers Bureau. My first feature was published in June of that same year. Several more of my features were published before I turned to writing short stories.

What goals did you want to accomplish?
When I became a published writer of both features and short stories, I felt I had reached my goal. Truthfully, I never believed that I would actually see my name in the by line in a national magazine. Therefore, you
can imagine my delight when it kept happening at regular intervals. This was it; I had done what I had set out to do. But then, at various writers meetings, I began talking to some ‘wannabe novelists’, who made me realise that I wanted to be a novelist, too. However, I was soon to find out that this goal was going to be more difficult to achieve. Writing The Trojan Project wasn’t easy, but it was nothing compared to the difficulty of finding a publisher. Here in the UK most of the large publishers will only accept submissions presented by an agent. On the other hand, some agents don’t want to know unless you have had a novel published previously. It’s a catch 22 situation. It was only through sheer perseverance that I finally found a publisher to take me on.

Tell us about your latest book.
My novel, The Trojan Project, is an action/thriller. The story begins on a remote farm in the Cheviot Hills in North East England. A young mother is concerned when her husband, Pete doesn’t come home that evening.
While looking down the lane for his truck, she witnesses a bright green light in the sky, followed by a cloud. The next morning, when Pete still hasn’t returned she goes out to find him and makes a terrifying discovery.
Reporting this to the local police station, she finds it difficult to make the officers believe her until a quick-witted young constable sees something to make him reconsider. Thus begins a race to stay alive.
When I wrote The Trojan Project, it was meant to be a stand-alone novel.
However, I have had several people asking me to write a sequel, so you never know. ☺

How do you develop characters and the story?
I try to put myself in the character’s situation and I write what I see and feel at that time. As for the story itself, I didn’t have a plot, notes or have any real idea where I was going. I simply made the whole thing up as I went along. Incidentally, I do the same thing when writing short stories.

Who is the most likeable character?
I think it would have to be Andy, the young police constable. Bright and alert, he joined the force to catch criminals. However, when he passed out of college, he was disappointed at being stationed in the quiet market town of Wooler, under the watchful eye of Sergeant Gilmore. How could he know that his life was suddenly going to be turned upside down? Yet when it is, he rises to the occasion and proves his worth.

Best review for the novel?
I have had several good reviews for The Trojan Project. However, I think one of the best is from Brian L Porter, author of A Study in Red: The Secret Journal of Jack the Ripper. Award Winner of The Predators &Editors Best Thriller Novel of 2008:

"Terrifyingly Real - An Edge of the Seat Thriller from Start to Finish! The Trojan Project is, without a doubt, one of the finest thrillers by a debut novelist I have read in a very long time. This book had me hooked
from page one and the storyline was so terrifyingly plausible that it sent shivers down my spine. Eileen Thornton weaves an ingenious plot and the characters are all too recognisable as normal, everyday people caught up in a horrendously frightening situation, where no one is what they seem and no one knows who to trust. The villains of the piece are all the more villainous because of what, rather then who they are, and I found myself cheering for the heroes of the book as they slowly unravelled the mystery behind the ghastly Trojan Project. The truly chilling part of this tale is that the scenario the author has skillfully created just might happen one day, and as a result, I found my heart beating a little faster at times as the chilling reality of that fact made itself so clearly evident. The bookreminded me very much of the works of one of my own literary
favourites, Robert Goddard and that is probably the highest compliment I can pay to this author. The Trojan Project is without a doubt a beautifully crafted and chillingly superb read and I wholeheartedly recommend it to anyone with a love for the thriller genre. Bravo, EileenThornton!"

Wow! Outstanding review, and I'm looking forward to asking Brian a few questions later on.
What are your current projects?
I have started a sequel to The Trojan Project. However, I have also begun writing a novel in a different genre. This one is more light and frothy and is to be called “Divorcees.com”. I am also working on a couple
of short stories, as I don’t want to be forgotten in the short story market.

Where to buy?
The Trojan Project can be found on both Amazon.com and Amazon.co.uk.
It can also be ordered from most bookshops in the UK

Posted by Susan Whitfield at 8:00 AM

Nice to see The Trojan Project getting the recognition it deserves.

Lovely interview, and lovely to find out how you got from wannabe to real. I'm still wannabeing, and your book's on my wannareadit list.

A big thank you to Susan Whitfield for interviewing me for her blog. I would also like to thank Tilly the Rescue dog, Sheila Deeth and Joylene for their comments. (I hope you enjoy, The Trojan Project, Sheila)